It's a big week in the Dales and Weatherfield

Next week is ITV’s Super Soap Week, but who will die in Emmerdale and Coronation Street?

It’s a big week for both soaps.

While Emmerdale murderer Meena sets out to claim her next victim during the survival challenge, cobbles residents are in danger as a huge storm blows in and the Platts’ sinkhole opens up.

It’s going to be a week filled with stunts, but whose life is on the line? Here are the list of those at risk in both Emmerdale and Corrie.

The survival challenge begins with cries of enthusiasm.

As the survivalists jump into the rafts and set off down the river, Billy and Ben try to rally their respective team members.

All seems to be going well, but the day soon takes a horrible turn and many are left fighting for their lives in the menacing waters.

With Meena on a mission to kill and the elements set against them, the events turn into a race to survive.

Viewers know Meena is out to kill Victoria after her boyfriend David confessed he’s in love with her.

Next week, the challenge goes horribly wrong as it looks like the survivalists are thrown off the rafts and into the river.

We will see Meena hold Victoria’s lifeless body under the water, but someone is watching them from afar.

Wanting to find out what they’ve seen, Meena follows them into the maze.

With only one thing on her mind, Meena is ready to kill… but has she already killed Vic?

David and Meena have been dating for nearly a year, but he’s unaware she’s killed two people.

Meena knows David planned to leave her for Victoria, is he in danger?

It’s not revealed who sees Meena trying to drown Vic, but is there a chance it could be David?

While Meena is the one with murder on her mind, fans have a theory there will be a huge plot twist which sees her killed.

Is Manpreet in danger?

Charles and Andrea are also on the survival challenge. Pictures show he’s also plunged into the river.

Andrea is also set to take part in the survival challenge.

Fans have a theory Meena will kill her, in order to get her out the way so Manpreet can date Charles.

Charity and Mackenzie separate themselves from the respective groups in order to cheat.

However Mack hears a loud scream coming from the edge of a pond.

As he approaches it, he sees larges ripples moving across it, suggesting Charity has vanished beneath the surface.

Has Charity fallen in?

Mack is also on the survival challenge and it looks like he could be in danger.

Is he the one that sees Meena trying to kill Vic? Or could he end up dying trying to help Charity?

Priya and Ellis head off for some cheeky fun in the woods.

They share a moment of post-coital bliss before Priya heads to drop off the survival challenge prize at the maze.

But is it a good idea to leave Ellis alone in the woods?

As Priya heads off to drop the survival challenge prize at the maze, could she be heading into danger?

One of the people running the survival challenge is Billy Fletcher. Could he also be in trouble?

Ben will also be at the challenge, as he will be helping run the event.

Is he in danger of being murdered?

A huge storm blows in, opening up the sinkhole in the Platts’ garden.

Meanwhile, Abi goes after Corey with a gun, the Alahans are involved in a horror crash and drug lord Harvey returns for revenge on Leanne and Toyah.

It’s no secret that Abi wants revenge on Corey Brent, who murdered her son, Seb.

Abi is loaded with a gun and is prepared to kill.

However as she comes face to face with her son’s killer, the ground opens up beneath them.

Trapped in a sewer with water riding around them, the two have a face off.

But who has the gun?

Corey faces danger as Abi is hellbent on revenge. Will she go through with her plan?

After the street is evacuated, Jenny finds herself swallowed by the ground as she searches for Johnny.

When Johnny finds out Jenny is in the sinkhole, he edges into it, determined to save his ex wife.

Johnny manages to find her in the sewer. As the water continues to rise, Johnny assures them it wo’t be long before someone rescues them.

That person turns out to be Shona, she grabs a rope and heads down a manhole in search of Jenny and Johnny.

But will she make it out alive? 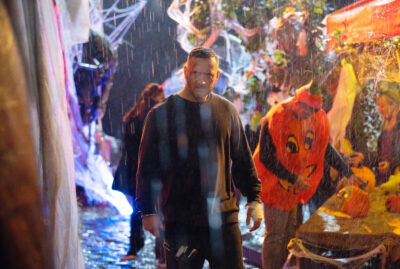 Harvey manages to escape prison and heads to Coronation Street to get revenge on Leanne.

He ends up chasing her on the street and the ground swallows them. Will they both survive?

Will Leanne and Harvey survive? Will Harvey live to carry out his revenge?

Dev, Aadi and Asha set off on their trip but as the storm gets worse, they get lost on a country road and their way is blocked by a fallen tree.

On the same lane, a prison van swerves into the Alahan’s stationary car.

As smoke seeps into the car, Dev has to decide whether to help Aadi or Asha.

He thinks Asha is in more danger and goes to help her and drags her away before the car explodes.

But what’s happened to Aadi?

Dev pulls Asha from the car, but is she okay after the crash?

Read more: Emmerdale: Who is Fiona Wade married to? When did Simon Cotton appear on Emmerdale too?

While Dev was able to save Asha, will he be okay after the explosion?