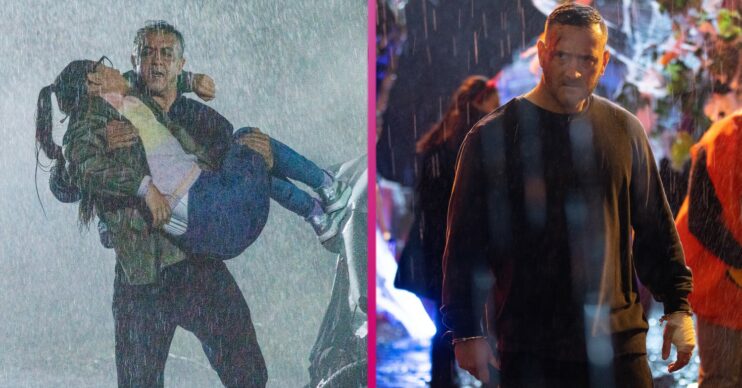 Super Soap Week 2021: Who will die in Coronation Street as the clouds gather this Halloween?

Spoilers: Death and destruction are heading to Weatherfield's cobbles

Super Soap Week 2021 is inching closer – and exciting details about what’s in store for Coronation Street have been teased.

‘Death and destruction’ is set to be unleashed on the cobbles this October as the elements combine for a perfect storm.

Among the horrors residents will endure are a catastrophic rain storm, a collapsed sinkhole, a fireball car crash and an escaped convict!

Here’s a taste of who will be facing what…

With most of Weatherfield’s residents picking out their Halloween costumes, Dev, Aadi and Asha Alahan are heading off on a family holiday.

However, they soon end up lost on a country road during a thunderstorm instead.

Read more: Everything we know about this month’s Super Soap Week

And in terrifying developments, with the heavens pouring down, Dev is left struggling with a terrible choice. Which of his kids will he drag from the burning wreck of his car?

By chance, dangerous drug kingpin Harvey is being rushed to hospital in a prison van down the same country lane.

However, he has another destination other than hospital in mind.

How will Leanne react when she comes face-to-face with the criminal who has been terrorising her family?

Jenny has moved on with toyboy Leo but she’s still stunned when Johnny tells her of his plans to leave Weatherfield.

The earth moves for both of them when she catches up with her ex husband in the pouring rain. But that’s because the earth is shifting around the Platt’s sinkhole.

How will they survive after he tries to save her and they both become trapped underground in the street’s Victorian sewers?

Abi’s desire for revenge over the death of her son still burns – and now she has a gun.

She wants to make Corey pay for murdering Seb. But despite her own feelings towards Corey, Nina is desperate to stop Abi.

But with the storm raging will she get there in time?

The exact air date for Corrie’s Super Soap Week is yet to be confirmed.

However, it will be this month – October.

And the Halloween theme suggests it could be anytime from the middle of the month onwards.

What do Corrie bosses have to say about Super Soap Week 2021?

Viewers will be blown away by Super Soap Week, producer Iain McLeod hinted.

He said: “We set out to make a week of breathless, brilliant drama. And boy, have our outstanding cast, crew, design team and writers delivered!”

Promising “astonishing visual spectacle”, he added: “It also has heart, heroism and humour in the most unexpected places.

“I have to say it again: our team has excelled themselves. Making any TV in a pandemic is hard, especially if you’ve been doing it non-stop for over 12 months. So I have to tip my hat to everyone for their tireless efforts in continuing to raise the bar, against all the odds.”