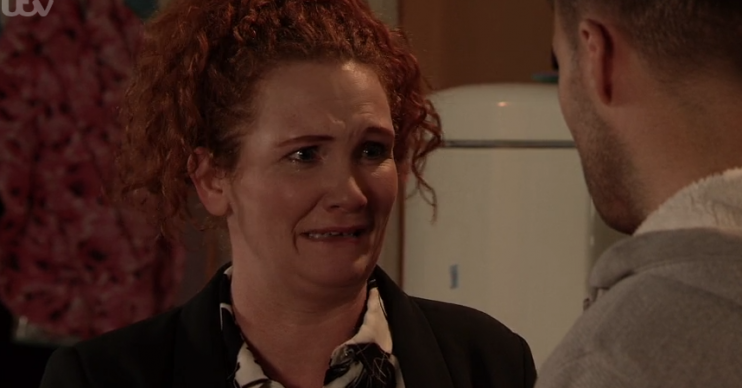 Fiz gets rid of Jade tonight

The soap schedules are a bit mixed up tonight with Emmerdale on at it’s usual 7pm, then Coronation Street airs an hour-long episode at 7.30pm and EastEnders moving to 8.30pm.

But the drama remains the same!

Here are the 10 biggest storylines from Friday November 29.

When the childminder cancels on Laurel, Jimmy offers to look after Archie.

Jimmy’s happy to put the abuse accusations behind them, but can Nicola forgive her friend?

Will Laurel let Jimmy have Archie – and can she and her former friends make amends?

2. Kim is suspicious of Graham

Kim wonders what Graham’s motives are.

Will she work out what his game is? Is he even playing one this time?

Despite his new romance with Tracy hotting up, Pete is distracted.

He’s concerned about Moira, who is falling apart having lost everything.

Will he get through to her?

1. Michelle gets good news – and bad

Ray arrives at the Bistro and tells Michelle he’s dropping the case against her – but that she needs to watch her back.

Meanwhile, Adam advises Michelle to ditch her plan to take the business from Robert.

Although thoughtful, she’s left furious when Robert lets slip he told Vicky about her ordeal with Ruairi.

When Robert later suggests they gather their family around to tell them about the wedding, Michelle paints on a smile.

But she later tells Carla the necklace he’s bought her isn’t enough to win her back.

Steve is disappointed when Emma reveals Fiona has bought her tickets to go to Australia for Christmas.

However when Amy shows Emma the stockings their dad has made for them, Emma decides to stay in Weatherfield.

Despite Nina clearly not wanting any help from him, Roy continues to interfere.

After tearing a strip off Richard’s carer for her poor time keeping, she quits, leaving Roy remorseful and Nina fuming.

But when Roy gives Aggie more shifts in the cafe so he can look after Richard, Nina’s even more unimpressed.

Fiz and Tyrone are delighted when they hear Hope can return to Bessie Street school.

Fiz breaks the news to Jade that her services will no longer be needed.

How will Jade take the news?

While living together for the wife swap, Ash encourages Honey to be more confident.

She helps her pick out a flattering outfit, but when Honey later meets Adam in the cafe, she doesn’t get the response she’d hoped for.

Will Ash’s encouragement be enough to help Honey realise Adam is no good?

2. Chantelle lays down the law

Chantelle has a go at Mitch about his parenting when he fails to return home after his date.

Determined to make it up to Bailey, Mitch plans a surprise.

But both Mitch and Chantelle are stunned to see Gray comforting Bailey about Dinah.

Chantelle later takes Gray by surprise and kisses him passionately – are things back on track?

Martin is spiralling out of control, having a go at anyone and everyone.

When he storms out of The Vic, Ruby follows him and insists he stay at her flat.

Emotional Martin thanks Ruby for her support, but as they talk he leans in for a kiss.

He stops himself, but for how much longer can they fight their feelings?