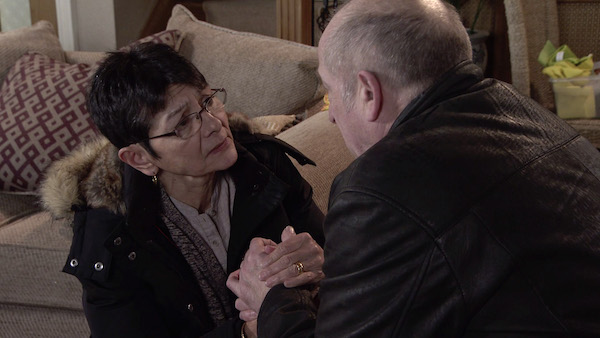 Geoff’s abuse and manipulation continues to get worse when he tries to force Yasmeen to move abroad in next week’s Coronation Street.

When Alya spots the spelling errors in the new menus Geoff has made are the same as some of the bad reviews online, she realises that Geoff was behind it all along.

Meanwhile, Yasmeen is sick of being cooped up in the house and wants to return to work. But Geoff is quick to dissuade her and suggests she cooks them a nice lunch at home instead.

As Yasmeen and Geoff sit down to eat, Alya marches in with evidence to suggest Geoff is behind the nasty online reviews.

Geoff denies that he wrote the reviews and to Alya’s annoyance, Yasmeen sides with her husband, insisting he would never write anything bad about the restaurant.

Geoff points out to Alya that it’s clear they can’t work together and suggests she sell her share of the business to him and Yasmeen.

However Alya is having none of it and tells Geoff where he can stick his suggestion.

Geoff makes out to Yasmeen that Alya is out to get him and that she’s an idiot.

He decides he’s going to see a business advisor to find out where they stand. Meanwhile Alya finds a series of cash withdrawals from the Speed Daal accounts.

Geoff lies to Yasmeen that he’s seen the advisor and suggests they should sell up and move abroad.

Geoff tells Yasmeen that she deserves a better life away from Weatherfield but when she voices her concerns, Geoff twists her words.

He suggests she’s having doubts about their marriage, leaving her upset. Will she agree to leave?

In the Rovers, Alya shares her concerns about Yasmeen with boyfriend Ryan.

Soon Eileen reveals that Geoff once locked Yasmeen in a magic box and went out, leaving Alya horrified.

Yasmeen later denies what happened was Geoff’s fault and claims he loves her.

But is Alya finally starting to see the abuse that Geoff has been inflicting on Yasmeen?

And can she save her gran before Geoff forces Yasmeen away from the street?