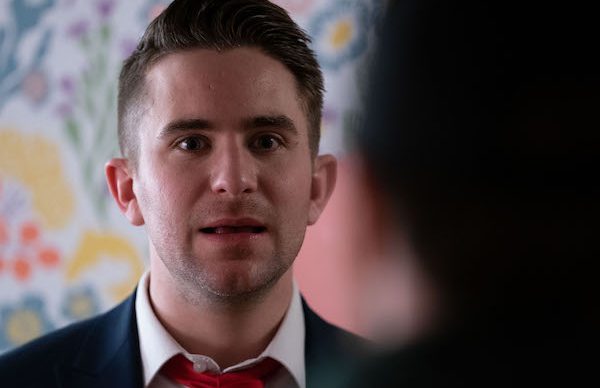 Callum's shocked by who turns up...

Callum gets a shock when an unwelcome visitor arrives on his doorstep in next week’s EastEnders.

The trainee policeman is nervous ahead of his important assessment but Karen and Stuart try to reassure him.

As he’s rushing around trying to prepare, he’s unaware someone is watching him.

Wanting to help his brother relax, Stuart has a word with Ben leading him to further reassure Callum.

As Ben leaves, however, the buzzer to the flat rings and Callum isn’t prepared for who arrives…

Who could it be? And is Callum in danger?

A couple of months ago, Callum realised he wanted to join the police force, much to the dismay of his boyfriend Ben, who is well-known to the Walford police for the wrong reasons.

Ben made the decision to stop his criminal activities to support his boyfriend, however he ended up breaking things off with Callum when he began plotting to have his sister Louise’s fiancé Keanu Taylor killed.

Ben discovered Keanu had slept with his dad Phil’s wife, Sharon Mitchell, and is the father of her unborn child.

The businessman hired Martin Fowler to kill Keanu, however Martin, along with Linda Carter helped him flee the country.

When a drunk Linda confessed to Sharon about Keanu, Sharon got hold of Martin’s phone and showed the police the video.

Phil, Louise, baby Peggy and Louise’s mum Lisa ended up fleeing to Portugal to get away from the police.

However, Ben decided he couldn’t go as he struggled to leave behind his daughter Lexi and Callum.

He and Callum ended up reuniting. But will this mysterious visitor spoiler their happiness?