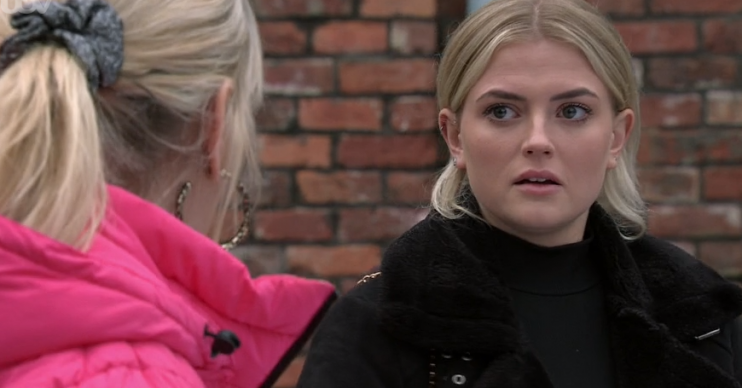 Coronation Street SPOILERS: Bethany Platt and Beth Tinker to clash as they start working together?

It looks like there could be trouble ahead for Bethany Platt and Beth Tinker as the pair are thrown together in next week’s Coronation Street.

On Coronation Street’s official preview site, new spoilers and pictures have revealed Bethany finds herself stuck in a difficult position after being fired from the Bistro.

The former restaurant employee believes Ray is blocking her attempts to get another job in a restaurant.

So her mum Sarah offers her a job at Underworld to help her out.

But how will Beth react? Can these two really stand working side-by-side or will it cause trouble at the factory?

Later, Sarah tries to persuade Bethany to not let her feelings for Daniel stand in the way of her career. Will the teenager listen to her mum?

Viewers know Beth hasn’t been a fan of Bethany since she discovered Daniel had shared a kiss with his former co-worker just days before his wife, Beth’s niece Sinead, passed away from cancer.

Beth has made it clear over the last few months that she doesn’t like Daniel and Bethany being friends and was left furious when she caught them kissing outside of Daniel’s flat.

Last week he announced in front of the Rovers that he and Bethany are now a couple, but how will Beth react when she finds out?

Daniel and Bethany formed a friendship last year but Bethany gradually developed a crush on the Bistro worker.

Meanwhile Daniel was unofficially married to Sinead Tinker, who had been battling cervical cancer.

After Daniel and Sinead officially got married, she discovered her cancer had spread and she only had months left to live.

Daniel ended up kissing Bethany after an argument with his wife and Sinead found out what had happened.

Despite what Daniel had done, Sinead chose to forgive him and passed away as he read their son Bertie a story.

In a video she recorded before her death, Sinead told her husband she wanted him to be happy and move on, but to never forget her.

What do you think of Daniel and Bethany?