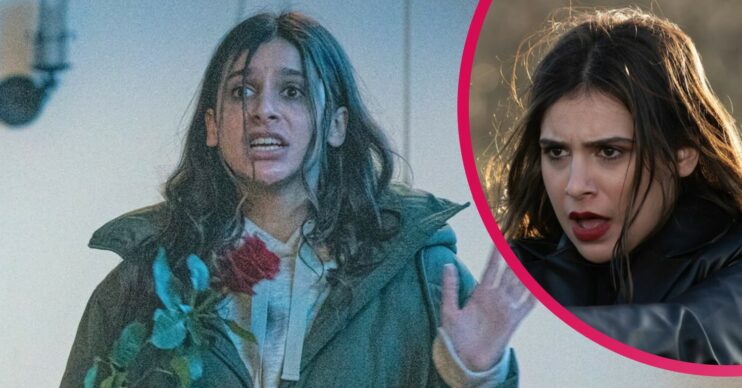 She's on a mission

Emmerdale spoilers for tonight reveal the first pictures of Meena‘s return to the village.

After weeks of tormenting Dawn Taylor from afar, Meena finally shows her face and sneaks into the empty church ahead of Dawn and Billy’s big day.

In these new pictures she can be seen looking grubby in a tracksuit and bomber jacket, with her hair unwashed and no make-up on.

She’s strutting up and down the aisle, clutching a red rose and clearly talking to herself.

In one image it looks like she’s even praying – but we suspect she’s probably praying for her kills to go as planned, rather than for forgiveness!

What happened in Emmerdale last night?

Dawn was horrified to come home to discover her wedding dress had been destroyed.

It had been slashed and graffitied in red paint, as well as the house being trashed.

Dawn was convinced it was Meena and went into the back garden with a baseball bat ready to fight for her life.

However, she didn’t find anyone there.

Billy believed it to be Dawn’s ex, Alex, though and sent him a very clear message about leaving them alone by beating him to a pulp.

Why does Meena come back?

Viewers know however, that Meena has been behind this week’s campaign of terror against Dawn.

She’s messed with her computer and made her make mistakes at work, she’s been following and watching and now she’s done this.

It’s all because Meena wants revenge for Dawn stealing her man.

She saw the save the date for their wedding and decided that would be the perfect time to take it.

A trailer released by the soap earlier this week saw Meena singing in the church: “Here comes the bride and Meena’s wedding surprise,” before she pretends to shoot a gun.

She kidnaps the bride and groom after they’ve said I do and takes them to a remote viaduct.

With their guests waiting at the reception, it soon becomes clear something has happened to the newlyweds.

Meena is holding them at gunpoint.

She tells Billy they’re going to play a game: he must choose who dies next.

Gallant Billy obviously insists he will take a bullet for his wife.

Meena fires, but who is shot?

More than one life is set to hang in the balance, but who will make it to the end of the week alive?