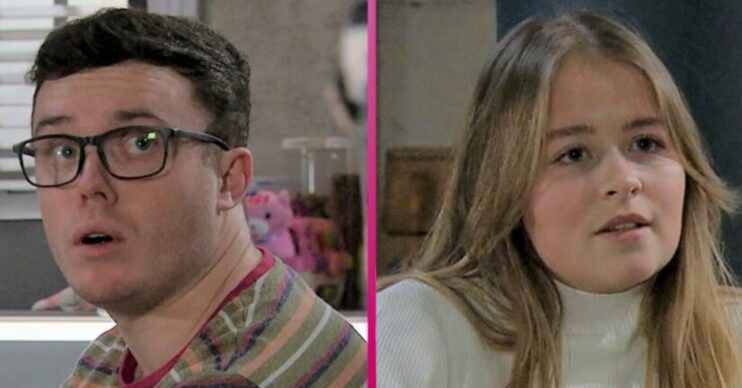 Will the dramatic Dingles spoil their elopement?

The newly engaged pair scheme to run off and get wed without anyone knowing, but will their romantic plans backfire?

What are Liv and Vinny planning?

Having got engaged on Valentine’s Day – sort of accidentally – Liv and Vinny still haven’t revealed all about their news to their families.

But when Vinny tells Liv that he’s got a friend in Daventry who’s a registrar and willing to bend the rules to allow them to get married, she’s excited.

And the couple plot to head off to Northamptonshire to tie the knot in secret.

But when their wedding rings arrive, both Vinny and Liv start worrying about how their families will deal with their news.

They joke about how Vinny’s mum Mandy might react when she finds out her beloved boy has said his vows without her being there.

But though they’re both chuckling, it’s clear Vinny and Liv are having doubts about having their big day alone.

Mandy gets the wrong end of the stick

When Vinny tells Liv they could get married the next day if she wants, the bride-to-be is pleased.

But they both feel guilty about leaving their family in the dark and start thinking they should change their plans.

However, when Chas and Mandy arrive and overhear a bit of their conversation, they get the wrong end of the stick and assume Liv’s back on the booze.

Paddy arrives, and things get dramatic – Dingle fashion – leaving Liv and Vinny convinced that eloping is the best thing to do after all.

The bride and groom pack their bags, and head off to Daventry, ready for their secret wedding.

But when they arrive, Vinny gets his phone out to discover lots of missed calls from a worried Mandy, who’s realised they’re missing.

Will Liv and Vinny go through with their runaway wedding? Or will they have a change of heart?