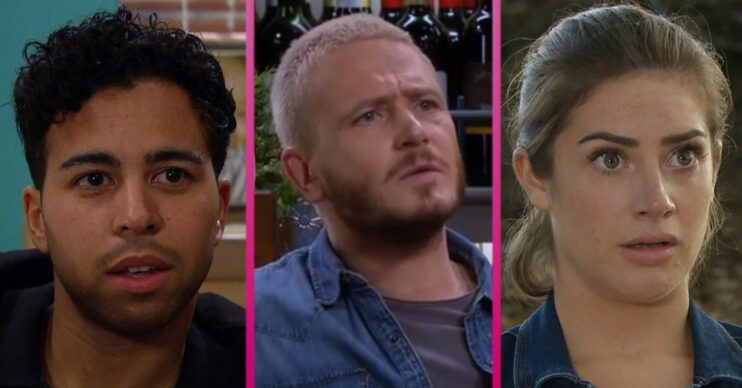 Ellis shared an emotional farewell with his brother as well as former lover, Priya Sharma, before departing for Australia.

It’s been a much-talked about exit given the circumstances in which Aaron is going. But will he ever be back?

Why is Ellis leaving Emmerdale?

Ellis has had a job offer in Australia.

A mate who owns a resort on the Gold Coast has offered him “the job of a lifetime” running the fitness side of things.

The friends hadn’t been in touch for years, but the mate had seen Ellis on social media, figured he was perfect for the role and offered him the job to start in a week.

Ellis was miraculously able to dash off to Hotten, get his visa sorted in record time, and pack his bags.

It means he is leaving behind Belle Dingle, with whom he has just rekindled his relationship.

He also has to say goodbye to Priya, who he was in love with before he got together with Belle.

What happened between Ellis and Priya?

Ellis said goodbye to Priya after she caught him just before he left.

She confessed she loved him and he told her he loved her too.

They both agreed that in another time and place they would meet and be together.

The couple had just begun to make a go of things back in October when Priya was left with life-changing scars on her back.

As she struggled to come to terms with her burns, she couldn’t face pursuing a relationship.

Despite Ellis telling her he would wait for her, he ended up back together with Belle, leaving Priya heartbroken.

But it seems his heart was always with Priya.

Why has Aaron Anthony quit Emmerdale?

Aaron was said to have been annoyed about the reported behaviour of two Emmerdale colleagues – Matthew Wolfenden and Isabel Hodgins –  during filming for Survival Week.

The Sun claims that the verbal altercation was over a comment made. It also alleged there was mimicking of a mixed-race co-star’s accent.

The source added: “We have been told that Aaron brought this up with Matthew subsequently and that there was a tense conversation between them. Matthew and Isabel stopped filming afterwards.

The pair were written out of the show shortly after the incident. However they returned to screens last month after a long holiday in Portugal.

It was later revealed Aaron had quit the show over what had happened.