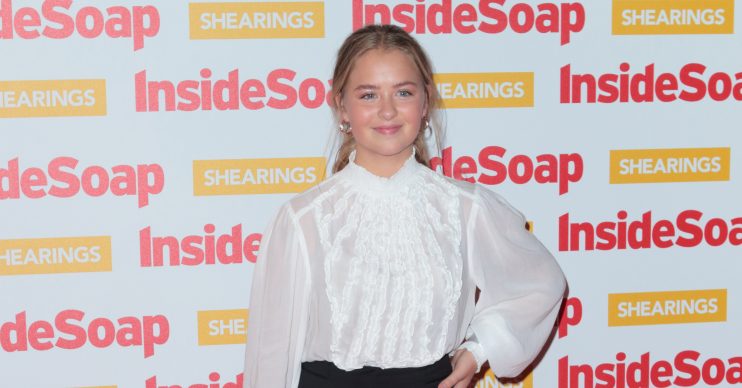 Soap stars are supporting Emmerdale’s Isobel Steele as her EP was released today.

The 18-year-old actress posted to Instagram to talk about her music.

She wrote: “My EP Sounds from the lounge is out now. Mental.

“I spent a lot of time working on on this project, the main reason being, these were the first songs I’d ever written and I actually had no idea what I was doing.

“So a massive thank you to Mike at HQ studios. And a special thank you to my dad who wrote all the bass parts and helped me bring these songs to life with his wonderful ideas and input.

“I’m still a little clueless about everything but I feel now, more than ever, I’m on the right track.

“The songs I’m writing are getting better and better and I honestly can’t wait to put them out for you all.

“Hope you stick around. Enjoy.

EastEnders actress Jasmine Armfield, who plays Bex Fowler, wrote: “I love it so so much. I haven’t stopped listening. You are so bloody talented!”

Former Emmerdale actress Louisa Clein, who played Maya Stepney wrote: “Mine arrived at midnight on the dot! I love it xxxx.”

Michelle Hardwick commented a series of emojis raising their hands in celebration with a red love heart.

Earlier this year, Isobel announced her EP would be coming soon and revealed the songs on the EP were Grow in Silence, Half of it, Helmet’s Too Small and O!

My EP Sounds from the lounge is out now. Mental.

Isobel also has her own YouTube channel where she has uploaded covers of songs.

Last year, she released a video of her singing her own song called Half of it, which is on the tracklist.

During her time in the Dales, Liv has been involved in plenty village drama.

Recently her brother-in-law Robert went to prison for the murder of rapist Lee Posner.

Have you listened to Isobel’s EP? Leave us a comment on our Facebook page @EntertainmentDailyFix and let us know what you think!