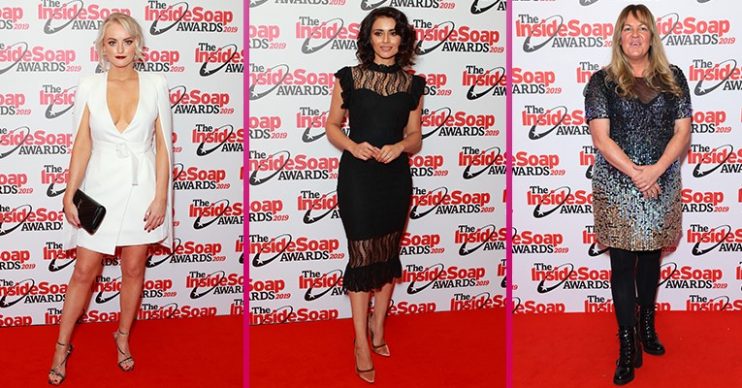 Soap stars hit the red carpet at the Inside Soap Awards

It was a unique year for fashion

The stars of EastEnders, Emmerdale, Coronation Street, and Hollyoaks were out in force at last night’s Inside Soap Awards.

As they posed for the cameras it was a evening of different looks – possibly the most alternative red carpet yet!

Long-flowing dresses were the order of the day – not the usual glitzy style ones, more casual, but equally as gorgeous floaty frocks.

Her co-star Katherine Dow-Blyton’s floral dress and matching suede boots would have looked equally at home in the Dales countryside as it did on the red carpet.

It had a deep split front, and every girl’s dream accessory: pockets!

Corrie’s Maureen Lipman, who won the award for Best Newcomer, despite having been in the business for 50 years, also went for a long dress.

Her black outfit had a vibrant touch of colour around the neck and on the arms, making it stand out from the crowd.

There were, of course, the obligatory sequins on display too.

Glamming up in sequins teamed with on-trend chunky black boots, she was barely recognisable as her chavvy alter ego.

Lorraine’s EastEnders co-star Priya Davdra, who plays Iqra Ahmed, might be dividing fans on-screen, but off it, she certainly hit the right note in white and silver sequins.

Teaming the smart outift with a sequinned top, silver bag and shoes, she looked super-stylish.

Rana Habeeb might be dead and buried, but her alter ego Bhavna Limbachia made a return to the red carpet last night to celebrate with her former Corrie co-stars.

Looking gorgeous in a black lace dress and showing off the shorter hairstyle she’s sported since leaving the cobbles, Bhavna helped the soap collect the gong for Carla’s mental health storyline, which saw Rana return from the dead in a special episode, earning it the title of Best Showstopper.

Her final scenes are playing out on screen at the moment, but Katie McGlynn has already finished filming as Coronation Street’s Sinead Osbourne, and she rejoined her former cast mates for the awards bash.

She looked stunning in a plunging white dress with cape sleeves.

She pulled off the strong style statement and looked fab!

Let’s not forget the boys though – they also made an effort for the red carpet.

EastEnders’ Roger Griffiths rocked a waistcoat and scarf too – and even accessorised with a man bag.

Emmerdale’s Dean Andrews (Will Taylor) brought some of the Dales countryside with him in his checked jacket and waistcoat set and dapper mustard hanky in the pocket.

Looks like a contender for the next owner of Home Farm to us – watch out Kim Tate!

Hollyoaks’ newcomer Jake Quickenden is no stranger to a red carpet and he looked smart in a three-piece suit.

The trousers hit just above his ankles showing off shoes sporting silver studs!