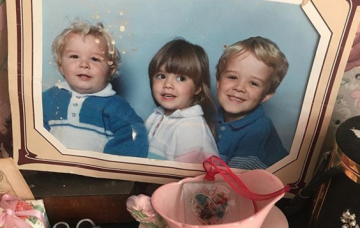 And fans can't get enough of it!

If there’s one thing that’s going to make your followers on social media go “Awwww”, it’s a throwback picture of you when you were a kid.

Especially if that picture happens to show your siblings looking baby-faced as well.

That’s something a certain Coronation Street actor discovered when he uploaded such a snap to his Instagram account this week.

Did you guess who it is in the photo?

Yep, it was Jack P Shepherd (David Platt) who was making his 227,000 followers go all gooey with the vintage pic.

Referring to his older sister and brother, the 30-year-old actor – he’s the one on the left – captioned the photo with the simple words: “Me, Amy, Tom.”

And, naturally, his followers gave the shot a big thumbs-up. One wrote: “You look soooo cute!”

Another added: “#Cute then and even #cuter now.”

It’s the second time in a week that Jack has brought smiles to his followers’ faces by uploading cute pics of children.

A few days back, he posted an adorable photo of his daughter Nyla, nine, and his son Reuben, five – his kids with his ex-fiancée Lauren Shippey.

In the shot, the two tots were seen fast asleep on a bed, sandwiching an equally cute-looking teddy bear!

A photo shared on Instagram showed Hanni kissing him on the cheek, with the words “She said yes” splashed all over it.

As yet, neither Jack nor Hanni has confirmed that a wedding’s on the cards.