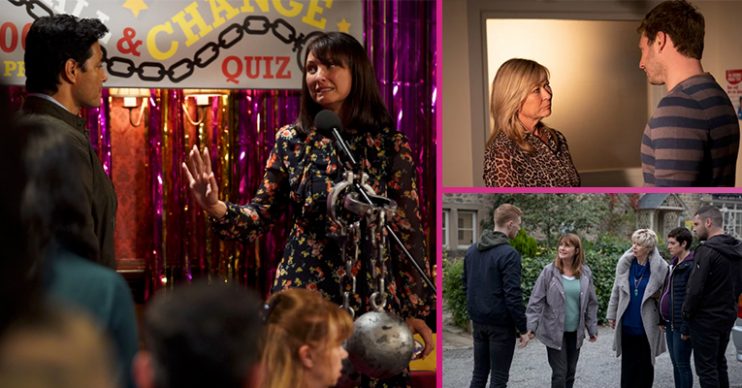 Andrea's taken to hospital and Honey's had enough

Tonight’s Emmerdale is an hour-long special at 7pm, meaning a clash with EastEnders, which is still on at 7.30pm.

Andrea is taken to hospital in the Dales, while Wendy finds herself the victim of an attack.

Over in Walford, Honey has finally had enough of Adam…

Here are the six biggest spoilers from Tuesday December 3.

Kim has the DNA test results and is determined to track down Andrea and reveal who Millie’s real dad is.

But when she finds her daughter-in-law, Andrea tells her she’s bleeding and is worried she’s losing the baby.

Kim whisks Andrea to the hospital, with Jamie soon arriving after receiving a troubling voice message.

With Jamie fussing over Andrea, Kim feels like an intruder on theior love.

But with the unopened test results weighing heavily in her hands, will Kim still reveal the truth?

Diane is desperate to protect Victoria from finding out Wendy is moving to the village, but before long Vic is left devastated by the news.

Luke begs Victoria to believe he didn’t know what his mother was planning and during a confrontation in the street, Luke tells his mum he believes Lee did rape Victoria.

Wendy breaks down, but remains defiant that she’s not going anywhere.

Wendy’s decision to stay hasn’t made her popular, and later that night someone smashes the windows of Dale View.

She rushes outside to catch the culprit, but is left on edge as no one is to be seen.

Who has smashed her windows? And will it make her leave?

4. Moira is gutted by Pete’s betrayal

Moira is shocked when Pete quits to go and work with Nate.

She’s left heartbroken by his betrayal. Will this push Moira over the edge?

Adam is trying to cover his tracks and lies to Iqra before backing out of plans with Honey.

Honey knows what her other half is up to, so distracts herself by helping Mick out with the Ball and Change quiz at The Vic.

But when Iqra asks about Adam’s secretary ‘Sally’ Honey, fully aware he doesn’t have a secretary, cracks.

Seeing Adam then flirting at the bar, Honey’s had enough and she takes matters into her own hands.

Adam tries to stop her, but Honey is out for revenge…

2. The winners of the wife swap are announced

Mick is preparing for the Ball and Change quiz, but soon realises he shouldn’t have trusted Shirley with the questions…

After Mick saves the night, the couples throw themselves into the competition, but who will emerge victorious?