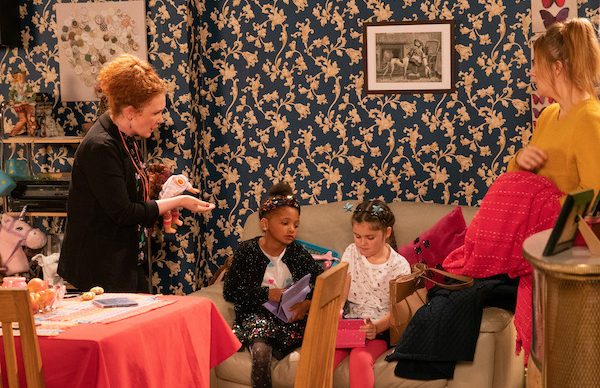 Andrea's on edge, and Fiz lashes out

Tonight sees us visit Emmerdale at 7pm and Coronation Street at 7.30pm and 8.30pm.

Andrea is holding onto her secret in the Dales – but for how long?

And Fiz is struggling with Hope still in Corrie – can anyone help?

Here are the seven biggest storylines from the soaps on Wednesday November 27.

1. Andrea dreads the truth coming out

But how will Kim deal with the knowledge?

Will Jamie learn the truth – or will Andrea persuade Kim, and Graham, to keep quiet?

Bernice is pleased she’s come up with a present for Liam, but Leanna is hurt she wasn’t involved in the final decision.

Trying to make it up to her future stepdaughter, Bernice suggests Leanna help organise the hen party.

Furious Billy doesn’t know how to deal with Al after Dawn uncovered his secret.

Will he reveal the truth and take Al down?

1. Fiz lashes out over Hope’s behaviour

Fiz and Tyrone tearfully make amends as she confesses she thought he would leave her if he knew the truth about Hope.

Together they decide they need to be tougher with the little girl, but meddling Jade is soon expressing her concerns over Fiz’s parenting skills to Evelyn.

When Fiz later discovers a cigarette lighter in Hope’s doll, she smashes her iPad in a fit of rage.

But what is Jade’s real game?

Roy is shocked to see how frail Richard is and Nina blames Roy for her dad’s setback.

Back at the cafe, Roy confides in Carla he has agreed to look after Nina when Richard dies,.

He later goes back to Richard’s flat and offers to help Nina move the air condenser, but when she refuses she ends up injuring herself.

Realising the strain Nina is under, Roy calls adult social services and requests a reassessment of Richard’s situation.

But Nina’s less than pleased and tears a strip off him for interferring.

3. Paul confronts his past

Billy makes Paul an appointment to speak to a counsellor at a sexual abuse charity.

A nervous Paul manages to open up to Andy about his excperiences and the abuse he suffered.

As Andy assures him the hardest part is over, he says Paul’s next step is to make a statement to the police.

Nick tries to get Kirk onside, but the factory girls are already onto him.

As he tries to convince them there would be more money in packing, Sarah steps in and reveals she has a better plan.

She thinks they should make bespoke products and sell them directly to the public.

The workers and Nick are impressed, but will they agree to the plan?