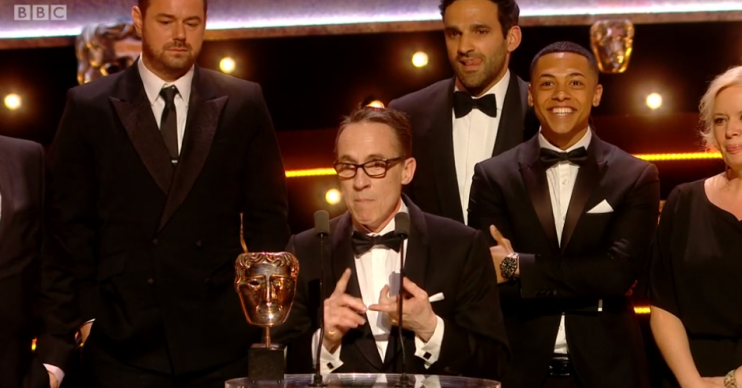 Some felt other, better, shows were overlooked

The British Academy Television Awards took place on Sunday night (May 13) and EastEnders was crowned winner of the Soap and Continuing Drama Award.

He took to the stage and said: “Thank you so much, we are thrilled to receive this. If I was to thank everybody I needed to thank I would be standing here for the next hour and you would be throwing rocks at me.”

He continued to say an overall thank you to the cast and crew – picking out Danny Dyer, joking that he might start talking about David Cameron if he didn’t get a mention.

Earlier in the evening Danny had presented an award for Must See TV Moment alongside Holly Willoughby, and referenced his previous rant about the former prime minister.

John’s final words were: “I must thank Kate Oates for leaving Coronation Street.”

Fans were divided over the soap winning, given it’s not had the best last few years.

Eastenders just won a BAFTA? I saw the end of the Christmas Day and the Boxing Day episodes. They were embarrassing. This bloody country 🤦‍♂️ #BAFTATV

#Eastenders winning a BAFTA is laughable. It’s had the worst couple of years in its history. Worst of all the soaps by far in so many departments.

#baftas Eastenders, you’ve got to be kidding! Who are these BAFTA people?

EastEnders was in a category with Coronation Street, Hollyoaks, and Casualty.

Many people watching at home were outraged that ITV soap Emmerdale wasn’t even nominated for the award.

I just don’t believe that eastenders has got a bafta what with it’s depressing story lines. Brought Ben Mitchell back with a head transplant for the sixth time. Harry Reid was the best actor to play Ben. What happened emmerdale not being nominated.left out for eastenders to win

@BAFTA #BAFTATV any reason Emmerdale @emmerdale wasn’t nominated? Could it be to ensure Eastenders wins something again? I smell a rat, probably BBC shaped 👎🏻👎🏻👎🏻

🤔 Who fixed the nominations so that Emmerdale was left off the list. 🤨 did 💷💷 change hands😏😏

There were plenty of people annoyed that Casualty didn’t get the nod after such brilliant storylines of late, including Iain’s depression plot.

Casualty should have won the Bafta! @mikeTstevenson acting in his Iain storylines lately, deserves that BAFTA! The issues they’ve tackled – way better than all the screaming/shouting and fighting that happens in Eastenders. @BBCCasualty was robbed! #BAFTATV

For once EastEnders did not worth winning the Best Continuing Drama ward. Casualty has been been on another level over the last 6-12 months with Iain’s storyline. Been brilliant. Glad Jon Sen has moved to EastEnders to hopefully return to its roots #EastEnders #bafta

Eastenders for what, screaming and fighting because that’s all they do! Casualty was robbed.#BAFTATV

Some people accused the ceremony of BBC bias – although other than screening the show, the BBC are not involved in the awards themselves.

#BAFTATV well what a surprise ! The BBC gave Eastenders a BAFTA ! The worst and most depressing programme on the tele !

#BAFTAs Of course. A BBC soap opera has to win an award from the BBC’s award show. #EastEnders has improved throughout this past year, but I don’t think it’s good enough to be given a BAFTA. That’s just me though.

But there were plenty of other viewers who were thrilled to see EastEnders win.

The show has been gaining in strength following the arrival of new boss Kate Oates, and it seems the hard work is paying off.

@bbceastenders
Congratulations to Eastenders, in winning the 2019 Bafta for best soap.
You all work so very hard in bringing a bit of the Eastend into our homes through the week! You are all fabulous every cast member, and those behind the scenes, a BIG thank-you xx

Ahh well done @bbceastenders , every single one of you deserve that award. ❤ #BAFTA #EastEnders

I hope you are all celebrating – You are all fabulous 💕💕💕💕

Get in there! Well done to @bbceastenders and over the moon. 👏🏻 #EastEnders #BAFTATV

Do you think EastEnders deserved the BAFTA? Leave us a comment on our Facebook page @EntertainmentDailyFix and let us know what you think!