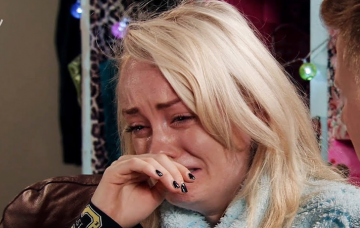 Coronation Street boss Iain MacLeod “hasn’t decided” whether to kill off Sinead Tinker or not.

The executive producer admits it will become a “harder” decision to do away with the character, who has been diagnosed with cervical cancer, as times goes on because Katie McGlynn and her on-screen husband Rob Mallard (Daniel Osbourne) have been doing such a great job playing out the hard-hitting plot.

Read more: Coronation Street SPOILER: Will Rita get kicked out of the Kabin?

He said: “It’s a really long running story and we genuinely haven’t decided what we are doing with the ending.

“Certainly, the longer it goes on the harder it becomes to kill Sinead because Katie and Rob have been so good in it – they’re almost acting their way off the butcher’s block.

However, if Sinead isn’t killed off then she looks set to remain on the cobbles for a long time.

Iain added: “As to which is the right one, I’ll get more of a sense at the next writers’ conference.

“If anyone were acting their way onto a long-term tenure on the show, it would be Katie and Rob.”

Katie admitted in October she was grateful for having a huge ‘Coronation Street’ storyline to get stuck into, because it had “been such a while” since she last had to play out a serious plot.

When asked if it is difficult to get back into a serious storyline, she said: “It has been a while … I think this is my sixth year in ‘Corrie’ and I’ve just been playing a ditsy character for so long.

“We’ve had the crash, we’ve had the abortion, but other than that it’s just like a silly, daft character, which is fun but it’s just been such a while since I’ve had to put myself in those shoes.

“I had quite a lot of serious storylines when I did Waterloo Road, but I’m just trying to image being in her shoes.”

How do you want the storyline to play out?