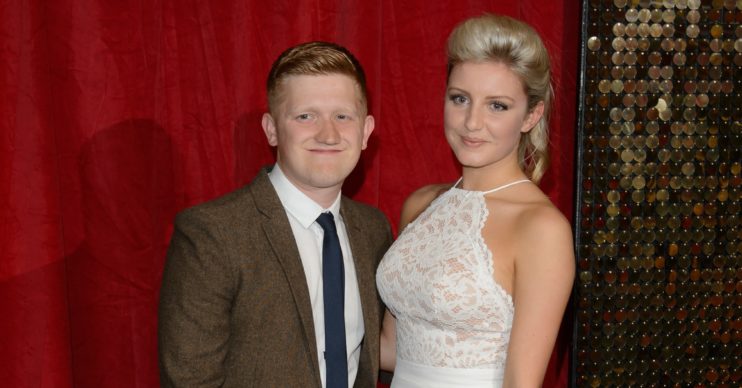 The Coronation Street star is expecting his first baby with Briony

Sam Aston’s wife Briony has showed off her impressive yoga moves as she reveals her growing baby bump.

The yoga instructor posted a picture of herself doing a handstand on her Instagram page.

She captioned the post: “So it turns out being pregnant helps with my balance when in a handstand. I guess that was the secret all along yogis.”

Her followers commented saying how impressed they are.

One wrote: “Ahah amazing! Gonna give it a go next trimester.”

Another added: “Wow I can’t do that now, nevermind when I was pregnant.”

Briony has continued to share bump updates with her followers since announcing her pregnancy. Recently she shared a picture posing naked to show her bump.

Back in May, Sam, who plays Chesney Brown in Coronation Street, and Briony announced that they’re expecting their first child.

They later revealed they’re having a baby boy, who is due to arrive in September.

The couple, who got married last year, also revealed they would like to ‘fill their house with children’.

Our house isn’t big enough for that many, but we want to fill our house with children.

However Sam, who is one of nine siblings, admitted he doesn’t think they will have as many kids as his parents did.

Speaking to OK! Magazine, Sam said: “We’d like a big family. I’m one of nine children and I’m grateful to be part of a huge family as it’s magical, but I’m not sure we’ll go to nine. That’s a lot of children and financial commitment.

“Let’s not forget I have five children on-screen too!”

Briony added: “Our house isn’t big enough for that many, but we want to fill our house with children. I’d like a big family.”

Although Sam is only expecting one baby in real-life, his alter ego Chesney became the father of quads last year. As he already had a son named Joseph, he is now a father of five.

Have you tried yoga during pregnancy? Leave us a comment on our Facebook page @EntertainmentDailyFix and let us know what you think!