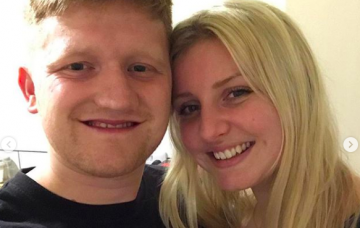 Corrie's Sam Aston, who plays Chesney Brown, is set to tie the knot with his yoga instructor partner this weekend

Sam Aston, who plays Coronation Street fave Chesney Brown, is set to marry his fiancé Briony Gardner in front of his friends, family – and of course a Corrie star or two – tomorrow.

The 25-year-old actor, who first joined the cobbles way back in 2003, will be marrying his yoga instructor partner Briony this Sunday (May 5).

Briony posted an image of their wedding rings to her Instagram stories, according to The Sun, and the box had the words “Sam + Briony 05.05.19” inscribed.

The couple have been together seven years, and several Corrie stars are rumoured to be joining them in celebrating their big day.

Alan says he’s got a fresh haircut from Salford’s Cult & Coffee, a trendy barista joint that doubles as a barbers.

And given that Andy Whymont (who plays Kirk Sutherland) attended Sam’s stag do along with Alan back in March, we think it’s more than likely that he’ll be at tomorrow’s do too.

Sam stunned Briony when he proposed to her on stage in front of more than 250 people at a charity event back in June 2017.

He told OK! magazine that year that weren’t too young to be getting hitched, and that they were more than prepared for married life.

Briony has spoken openly about her struggles with depression on her Instagram account, and says that Sam helped her through some dark times.

She’s also hit back at online trolls, after she claims many accused her of appearing “stuck up” on social media.

Her post’s caption included:”I’ve been told a couple of times in the past week that people thought I seemed stuck up before they met me. And I get that, it’s okay so don’t worry.

Are you excited for Sam and Briony’s big day? Let us know what you think of this story by leaving us a comment on our Facebook page @EntertainmentDailyFix.