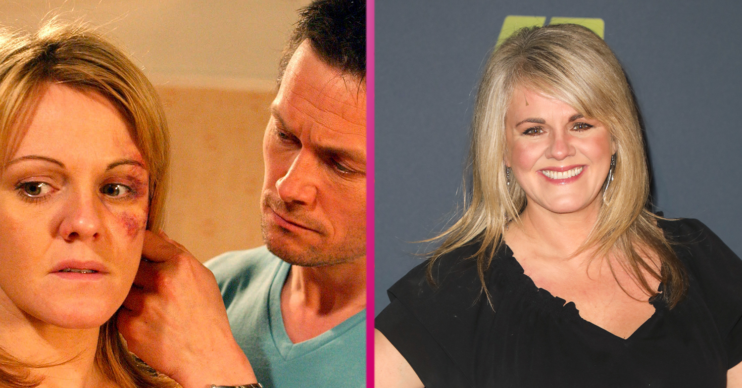 She left in 2006, pregnant with abuser Charlie's baby

Sally Lindsay has given Coronation Street fans hope that she will one day return to the ITV soap to reprise her role as popular character Shelley Unwin.

The actress, 48, hasn’t been seen in Weatherfield since 2006 when her character walked away from her abusive ex-Charlie Stubbs.

What happened to Shelley Unwin?

Pregnant with his child, she vowed never to let him “control” her again and told him he would have no part in the life of her unborn baby.

Viewers of the ITV soap were sad to see the fan favourite leave, but glad she got her happy ending.

I loved it – it was brilliant, it still is brilliant.

And we all know what happened to Charlie in the end… Tracy Barlow + statue = death.

Sally joined the cast as Shelley in 2001, before leaving in 2006 and going on to star in a number of TV shows including Ordinary Lies, Scott And Bailey, Mount Pleasant and Still Open All Hours.

Now, the mother-of-twins has hinted that she may return to the Street in future. After all, she wasn’t killed off!

Asked whether she would ever consider a return during an appearance on This Morning she said: “Oh gosh, I’d never say never. I loved it – it was brilliant, it still is brilliant.”

Sally’s character Shelley was involved in a number of huge storylines during her time on the cobbles, including a bigamous marriage to Peter Barlow and her abusive one with builder Charlie – who even cheated on her with her own mother!

She later dumped Charlie at the altar, but had a one-night stand with him and got pregnant before leaving the cobbles.

Sally added another string to her bow this year, covering for Warwick Davis as host of ITV quiz show Tenable.

Would you like to see Sally Lindsay return as Shelley Unwin to Corrie? Let us know on our Facebook page @EntertaimentDailyFix.