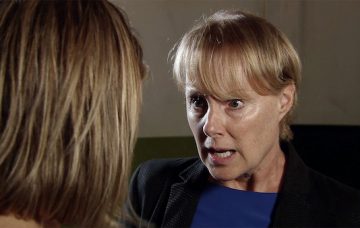 Sally was living her character's storyline

Sally Dynevor couldn’t bear to watch her Coronation Street breast cancer storyline after she was diagnosed with the disease at the same time as her character.

The 55-year-old actress has previously admitted the soap saved her life because she went to the doctor after realising she had the symptoms while researching the plot, and she has now admitted she was booking breast cancer operations as she was shooting similar scenes on the show.

She said: “We couldn’t watch it, it was too close to home.

“When I was filming I was booking in for operations. I said to the Corrie team, ‘I want you to write me to a point where you don’t need me anymore because I don’t want to leave the viewers in limbo,’ so I stayed in the show for a month until taking time off for my treatment.

“It was hard for the crew and the cast because a few of us felt like we went through it together.

“It was a very strange time in life.

“I was 46 and I always thought breast cancer happened to much older women. If it wasn’t for Coronation Street I never would have gone to the doctors.

“I was in total denial. I remember saying, ‘I’m sure it’s nothing, I’m sure I’m wasting your time.’ ”

Sally – who plays Sally Metcalfe on the ITV soap – is set to celebrate in 2019 when she is able to come off all of her breast cancer medication on the 10-year anniversary of getting the all-clear.

She added to OK! magazine: “As I’m 55 I have mammograms every year. I have one more year on the drug Tamoxifen and then that’s it.

“Next year in November will be my 10-year anniversary and I’ll come off all the medication. I can’t believe it.”

Sally will celebrate coming off her medication by climbing Mount Everest with Lorraine Kelly for charity Prevent Breast Cancer, of which she is a patron.

During a recent appearance on the TV presenter’s breakfast show, ‘Lorraine’, Sally said: “Next year I’m going to climb Everest Base Camp with Prevent Breast Cancer. It’s going to be amazing. It’ll be my 10 years [with the organisation] so it will be a really special reason for doing it. It’ll raise awareness.

Sally replied: “I’ve got the details. Maybe I should’ve done this when we were in the green room?

“We walk for 12 days but because of the altitude we have to stop every now and again. But it sounds amazing. And what a great cause.”