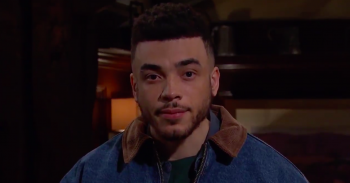 He has a thing for older women...

We don’t know much about Emmerdale newbie Nate Robinson as yet, but we do know he likes the ladies!

And at this stage we think he’s a good guy…

But could all that be about to change – is Kim Tate going to corrupt another of the good ones?

Nate arrived on the scene when he kissed Rhona Goskirk during the Big Night Out episodes. He was later seen getting a job with Pete Barton – Rhona’s boyfriend – and banging on to his new boss about how he was smitten with the woman he’d snogged.

Obviously Nate had no idea Pete was with Rhona, but when he discovered he’d kissed his boss’s girl, he soon found himself sacked, even though he didn’t actually know anything about Rhona having a boyfriend.

With Nate a totally free agent now, he might be about to set his sights on another village vixen: Kim Tate.

“It could pan out to be like that,” he said. “There’s a few women, he definitely does like the ladies.

“For me, he likes the older ladies, but he likes the ones around his age as well, so I don’t think he’s just for older women. So everyone!”

But Jurell also insisted Nate’s a good guy and won’t pursue Rhona now he knows she’s Pete’s girl (even though he dumped her when he found out about the snog).

“Nate is a very loyal character,” he said. “I think him knowing that she’s in a relationship he calls it off straight away. I don’t think he would pursue it, no.”

Loyalty and morals – not necessarily two things one would associate with Kim Tate. So what could bring them together?

Perhaps his hunt for a job? Or if he does manage to persuade Pete to rehire him, could their paths cross on the farm? Kim has made a play for Pete’s step-uncle Cain Dingle, so she’s no stranger to hanging around the Barton farm.

But could Kim really be the one for him? Or would another older Dales woman fit the bill? There’s plenty of them about for Nate to choose from!

Kim’s not been central to the storylines in the last few weeks following the revelation Joe Tate, who she’d ordered Graham Foster to kill, is still alive.

She’s recently reunited with her estranged son, Jamie Tate, who thankfully seems nothing like his mother. But will he ever forgive her for her lying, cheating, manipulative ways?

And if he doesn’t, could she seek solace in Nate’s arms?

Who do you think Nate should couple up with? Leave us a comment on our Facebook page @EntertainmentDailyFix and let us know what you think!