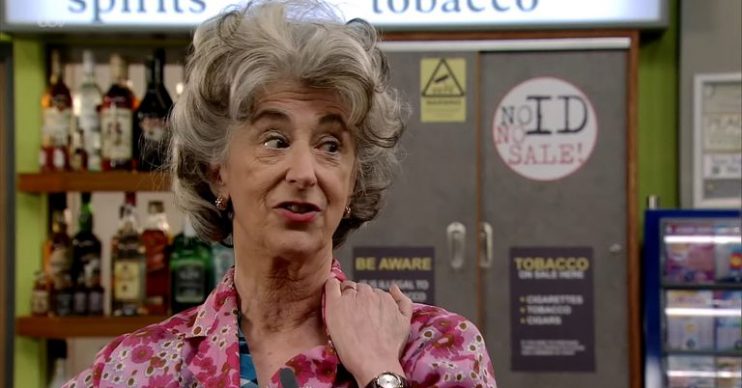 Evelyn Plummer, the resident battle-axe on Coronation Street, is about to show her (slightly) softer side in a new romantic storyline.

Tyrone’s grandma, whose bark IS as bad as her bite, will surprise some viewers by flirting up a storm when she bumps into an ex-boyfriend.

And soap fans will recognise her potential beau!

In upcoming scenes, the OAP – Overly Acidic Person – will run into an old flame.

Although she’s not known for her romantic appetite – save that for the likes of Gail Platt and Audrey Roberts – that’s all about to change when she and Tyrone take greyhound Cerberus to the vets.

As she sits in the waiting room, Evelyn runs into an older gentleman called Arthur Medwin – and it’s clear there’s history between then.

And lots of chemistry… Evelyn, you minx!

Evelyn later finds herself loitering in Victoria Garden with Cerberus and she is secretly delighted when Arthur turns up with his dog and they start flirting!

Evelyn and Arthur will reminisce about old times and how, if it weren’t for certain circumstances, they’d probably have married!

He tells Evelyn he’ll be in the Rovers tomorrow at 6pm.

Excited Evelyn reserves a booth for them in the pub and Claudia offers to do her hair and make-up.

But the makeover goes wrong when she looks in the mirror and is horrified to see she looks just like Claudia!

She decides to scrape off most of the make-up and waits patiently in the pub for Arthur.

But is Evelyn about to have her heart broken?

But soap obsessives will know him from his role as Obadiah Dingle – Charity Dingle’s estranged dad – in Emmerdale.

But, even before then, Paul has popped up in Weatherfield twice before, making this latest appearance his third time playing a different role.

In 2007, Paul portrayed Ivor Priestley for 10 episodes and, before that, he played an unnamed photographer in 1972!

Well he has been acting for nearly 50 years!

Evelyn’s past is still something of a mystery to viewers, who have largely fallen for Evelyn’s razor-sharp personality.

What we do know is that her daughter, Cassandra, gave birth to a baby boy, which she abandoned at a police station.

This baby was of course Tyrone, who was adopted before being reunited with his grandmother Evelyn years later.

Are you looking forward to finding out more about Evelyn? Leave us a comment on our Facebook page @EntertainmentDailyFix and let us know what you think!