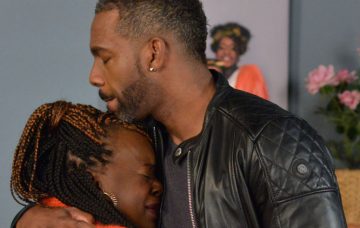 He's still watching the soap, too

Dancing On Ice star Richard Blackwood believes fans’ curiosity about the fate of his EastEnders character will see him return to Walford one day in the future.

The 46-year-old actor departed the BBC One soap earlier this year after dodgy geezer Vincent Hubbard disappeared following an encounter with some heavies working for gangster Aidan Maguire.

In debt up to his neck, Vincent struck a dubious deal with the police before grassing up the Irish villain and the hardest of soap hard men, Phil Mitchell.

But much to pregnant wife Kim Fox-Hubbard’s confusion and distress, Vincent vanishing into thin air has yet to be explained in storyline.

And Richard reckons viewers’ desire to see the mystery of why Vincent went missing get solved could be key to him rejoining the EastEnders cast.

Speaking to The Sun’s website, the stand up comic admitted he missed the “good times” he enjoyed on the show – and would be keen to return.

“I’m happy to watch it from afar and see how it’s developing,” he said. “But you know I’d always go back there.

“If there was a chance I’d happily go back.

“[The door] is slightly ajar, everyone loves a Vincent so I’m happy about that.”

Richard also noted how Vincent’s body has never been shown on screen and added how, in soapland, that could mean his character’s cliffhanger exit could be flipped into the beginning of a shocking comeback.

However, TV bosses have given no public hint that Vincent could be revived on the soap.

Earlier this year, Richard revealed his TV job came to an end because he was not given a new deal to stay.

He said: “It just so happened that I came to the end of my contract and they weren’t going to renew it.”

Admitting he was a “bit hurt” by the decision, Richard went on to say that he had always predicted he’d only stay in the soap for three years.

He added: “So when I came into EastEnders… I said if I get more than one year, I reckon I’m going to do three years… EastEnders is its [own] movie, I’m a character within it…

“My character within that movie had to leave.”

And when he left the show, Richard indicated he felt the timing was right to rest Vincent for a while.

“I have loved every minute of my time at EastEnders and although I will be sad to say goodbye, after three years it feels the right time to leave,” he said.

“I have been truly blessed with some great storylines since the moment I joined but when I was presented with my last story I knew it was time for Vincent to depart Walford.”