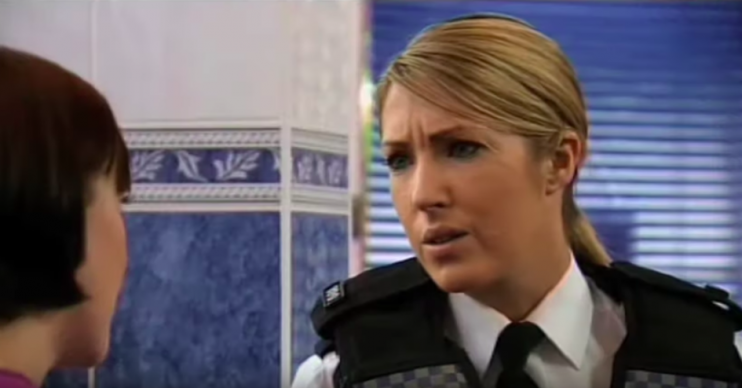 Rachael Elizabeth will return to Coronation Street 12 years after leaving the ITV soap – but she’ll play a different character.

The Liverpool-born actress, 38, played policewoman Abi Sharpe from 2007 to 2008, and was heavily involved in her friend Mel Morton’s storyline.

First seen in December 2007, she had an on/off relationship with bookie Dan Mason .

She later reappeared when Mel needed help with her dad Jerry, who was drinking too much alcohol after having a heart attack.

She’s already filmed several episodes and will be on screen in early March.

Mel also asked her to do a police check on her mother’s ex-boyfriend, Gary Denmark, who she claimed beat her up.

At the end of August 2008, Abi was devastated when she was forced to take a desk job after being injured in the eye trying to break up a fight.

She later relocated to Stretford and was never seen again.

But actress Rachael will soon rejoin the ITV soap playing a mum who clashes with Gemma Winter at her parent and baby group.

As reported in The Sun Online, the actress has already been back on set, with a source revealing: “She’s already filmed several episodes and will be on screen in early March.”

The report says that Rachael’s character will clash with Gemma, who has been struggling since giving birth to the quads.

A Coronation Street spokesperson confirmed the actress would appear in eight episodes.

Gemma – played by Dolly-Rose Campbell – hasn’t had the easiest of times recently, after a traumatic birth late last year and the exhausting reality of looking after four babies.

She was recently dealt another blow, when she was told her son Aled was deaf.

But the Coronation Street resident has more heartache to come as she will be bullied by other mums at a baby group.

She will take the newborns to a baby class, where fellow mum Vanessa will compliment her on her parenting skills.

But while Gemma starts to feel like she’s doing well, she’ll be unaware they are being nasty behind her back.

The unkind behaviour is set to kick off a mental health storyline for Gemma.

As well as appearing in Corrie, Rachael has had roles in Doctors, Gaynor Faye drama The Chase, The Bill, Home Fires and BBC sitcom Eyes Down.

She appeared as a semi-regular in Casualty as Beth Archer, and played glamour model Sarah-Leanne in the BBC drama series, Waterloo Road.

Do you have any sympathy for Gemma Winter? Leave us a comment on our Facebook page @EntertainmentDailyFix and let us know what you think!