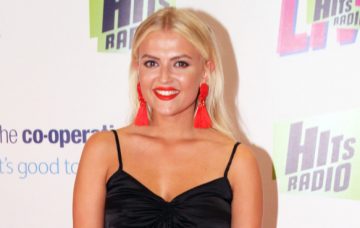 Corrie star Lucy Fallon has turned to her fans on social media to help shift her illness blues.

The 22-year-old ended a five day break from Instagram to ask her 376,000 followers to recommend healthy recipes to help perk her up.

“After being quite unwell this week, I am in serious need of a little detox and a kick up the [bleep],” the Bethany Platt actress wrote.

Adding an image of a rainbow-maned unicorn wearing sunglasses and referring to herself feeling better, she continued: “This is gunna be me.” 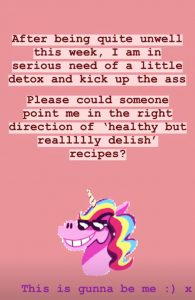 The most recent snap she shared before that Stories update was an photo of her and a friend before a Liam Gallagher gig last weekend.

“Me n my gal ready for Liam G #bezzie x,” she commented on the pic.

Lucy’s fans hang on her every update on social media. Last month, Lucy they were wowed as she unveiled a new hairdo.

She revealed she had chopped off her blonde locks into a shoulder-length style.

Hopefully her character Bethany can soon look forward to a fresh start too after a tumultuous few months on the cobbles.

Having featured in the soap’s hard-hitting grooming storyline for many months, things looked to have settled down after her ex fiancé Nathan Curtis and his criminal associates were caged.

But only last month she was kidnapped by Kayla Clifton, who was convinced her policeman father was innocent of raping Bethany.