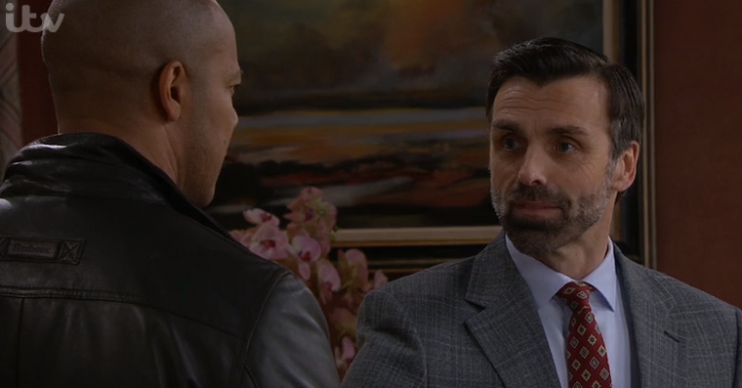 Will Al be Pierce's next victim?

Viewers of Emmerdale have predicted Pierce Harris will kill Al Chapman as he figures out his real identity.

Pierce came back to the village a couple of weeks ago and was exposed as the one who murdered Rhona’s boyfriend Graham Foster.

Last week, Pierce made sure he was knocked off his bike by Kim Tate and has told her he is a family law solicitor named Ollie.

With no idea who Ollie really is, or his history, Kim took him on to be her son Jamie’s solicitor in his divorce and custody battle again estranged wife Andrea.

In last night’s episode (Tuesday February 11 2020), Pierce went to Home Farm and after Kim started being nasty about his ex-wife Rhona, Pierce planned to hit Kim over the head with an ornament.

Luckily for Kim, Al walked in, ruining Pierce’s plan to hurt her.

Immediately Al was suspicious of the solicitor, especially as Pierce kept trying to dodge answering which firm he worked for.

It was clear Al went and did his research as he revaled to Kim that ‘Oliver’ had been lying to her and isn’t who she thinks he is.

Has Al discovered his true identity?

Viewers think if Al discovers the truth, Pierce will come after him and he will be his next victim.

Al is onto Pierce #Emmerdale

Fans of the soap will know Pierce definitely isn’t the nice man he’s painted himself out to be.

Pierce arrived in the village in 2016 and shortly after the death of his first wife Tess, he began a relationship with Rhona.

However Pierce showed manipulative traits and on their wedding night, he raped Rhona.

Eventually Pierce went to prison for what he had done and wasn’t heard of again until last year.

Rhona was informed Pierce was up for parole and earlier this year, Graham discovered the rapist had been released from prison.

After Graham warned Pierce to keep away from Rhona, Pierce came back for revenge and killed Graham.

But now Al has his suspicions, will he uncover Pierce’s past?