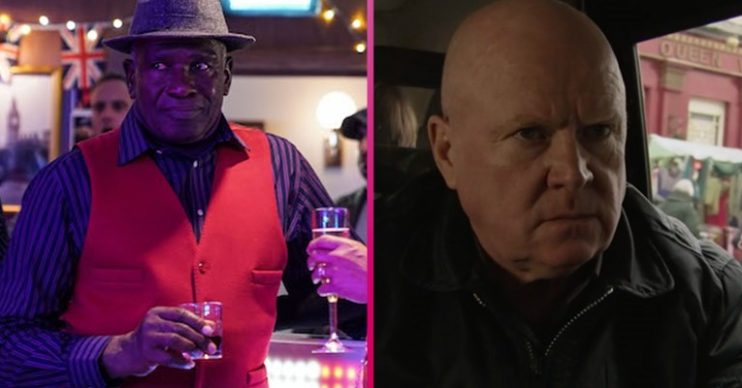 They both disappeared after the Thames boat tragedy!

Viewers of EastEnders have revealed they fear for the lives of Phil Mitchell and Patrick Trueman, after the dramatic events of the boat accident last month.

Some even believe the characters might be DEAD after ‘disappearing’ on the night of the disaster, which claimed the life of Sharon’s son Dennis Rickman Junior.

Soap fans watched in horror in February when a party on a boat ended in tragedy for the Walford residents.

As the boat sunk, poor Denny was unable to free himself and lost his life – leaving mum Sharon devastated.

Where are Phil and Patrick??? Not been seen since boat accident!

Phil was also in tears when he learnt of his stepson’s fate… Could this be why he hasn’t been seen since?

EastEnders viewers are alarmed that the Walford hardman has not been seen in the Square since.

Writing on Twitter, one said: “Where did Phil go after the boat accident? Have I missed something?#EastEnders.”

Another said: “Does anybody else know Phil was on the boat apart from Ben and Keanu, (possibly Shirley)? Because he got on that lifeboat by himself and we haven’t seen him again? He came back from Portugal and could have just gone back again?”

If Phil Mitchell isn’t having some breakdown somewhere over Denny then that’s him over for me. Steve’s break is no excuse. #EastEnders pic.twitter.com/NtWqYymCGg

not being funny, but where is phil? there must be a reason why we still haven’t seen him since dennis’ death. #EastEnders

Where did Phil go after the boat accident? Have I missed something?#Eastenders

A third said: “We haven’t seen Phil since the anniversary week, where’s he gone? #EastEnders.”

“Still no sign of Phil really?” asked one more, while another said: “Not being funny, but where is Phil? There must be a reason why we still haven’t seen him since Dennis’ death. #EastEnders.”

Another noticed that Patrick is also missing, adding: “Where are Phil and Patrick??? Not been seen since boat accident! #EastEnders.”

“We’ve not seen Patrick since the crash,” said one more viewer. “Is he dead?”

Where are Phil and Patrick???Not been seen since boat accident!#EastEnders

we’ve not seen patrick since the crash, is he dead lol #eastenders

Patrick. Anyone remember him? #Eastenders

Last time I saw him he was on the boat. What happened to him after that???

It’s becoming a valid concern now. Where the actual chuff is Patrick and why is no one worried? #Eastenders … and how did phil get off the boat?!

Another feared the worst for OAP Patrick, writing: “Why were they all just sat in the pub without Patrick the other night without a care in the world?! I reckon that Isaac might have done him in and I can’t cope.”

“Have I missed something here? Where’s Patrick?” asked another concerned citizen. “What happened to him in the boat accident? And why is no one talking about him?”

Could the Thames boat disaster have claimed more victims? Or are actors Steve McFadden and Rudolph Walker enjoying a well-earned break from filming?

One thing we DO know is that Phil will face the wrath of estranged wife Sharon Mitchell when he does decide to return.

Sharon recently discovered Phil’s involvement in the boat disaster, and ultimately his responsibility for Dennis’ death.

The grieving mum was lost for words in an episode last week when Karen Taylor let slip that Phil had caused the crash.

Where do you think Phil and Patrick are? Leave us a comment on our Facebook page @EntertainmentDailyFix and let us know what you think!