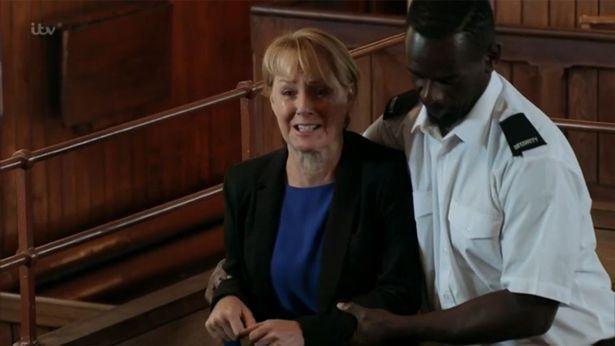 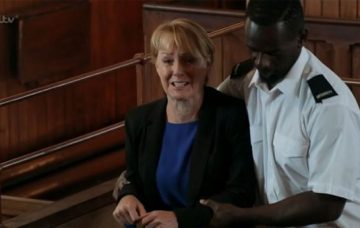 The former Mayor sobbed as she was led, handcuffed, out of the docks...

Loyal Coronation Street fans have been left outraged after seeing veteran character Sally Metcalfe dragged to a prison cell in floods of tears.

In upsetting scenes aired on Wednesday night (19 September), the former Mayor of Weatherfield and long-time Corrie do-gooder was locked up after being framed by dodgy Duncan.

Fans know she doesn’t deserve to be behind bars, and have kicked off a ‘Free The Weatherfield One’ campaign.

Long-term viewers of the ITV soap will know that fan favourite Deirdre Barlow – then Rachid – was jailed for fraud in 1998.

A public campaign took force in the UK, and even real politicians got involved, with Prime Minister Tony Blair declaring he would command his Home Secretary, Jack Straw, to investigate the issue.

After a couple of months, Deirdre walked free and was soon reunited with Ken Barlow.

People power had won the day and one of the greatest ever storylines had been cast in stone for time immemorial.

Now, with Sally facing the same fate, fans are resurrecting the campaign – well, it’s worked before!

Sally was dragged sobbing into a prison cell after being found guilty of intimidating a witness.

She’d made the mistake of calling ex-colleague Judith Fisher and telling her not to stand against her in court.

The judge accused Sally of tampering with evidence and using underhand tactics.

Stunned husband Tim jumped up from his seat and shouted “no” in the emotional scenes.

Even Duncan’s defence Imran realised things had gone too far…

Fans took to Twitter to plea for Sally to be freed, with many adding #FreeTheWeatherfieldOne.

One viewer simply said: “I think free the weatherfield one is needed again.”

Another said: “Is it too early to start the protests? Free Sally Metcalfe! Free the weatherfield one!”

A third added: “Omg i need to pull that tshirt from my drawer FREE THE WEATHERFIELD ONE.”

S.O.S. SAVE OUR SALLY@sallydynevor @Weatherfield999 @Joe_Duttine @BrookeLVincent
EXCELLENT PERFORMANCE TONIGHT FROM SALLY, AND CO…
GONE TO PRISON BEFORE SHE TURNS THE COURT INTO A COFFEE MORNING…
POOR SALLY…FREE THE WEATHERFIELD ONE. pic.twitter.com/G5A1GHWtHT

Free the weatherfield one !

Is it too early to start the protests? “Free Sally Metcalfe”! “Free the weatherfield one!” #corrie

Others thought Sally HAD done wrong, while others threw shade at Imran for defending Duncan.

Sally has been trying to clear her name after conman Duncan swindled Sally and her Mayor’s charity fund out of £40,000. He then lied to make it look like she was involved.

Speaking about what’s ahead for her character, Sally Dynevor recently said: “I’m really excited about seeing her out of her comfort zone and how it will affect her.

“She will no doubt make some enemies, Sally is never going to sit back and do nothing! She will try and make something good come out of the worst possible scenario.”

Do you think Sally deserves to be in prison? Leave us a comment on our Facebook page @EntertainmentDailyFix and let us know what you think!