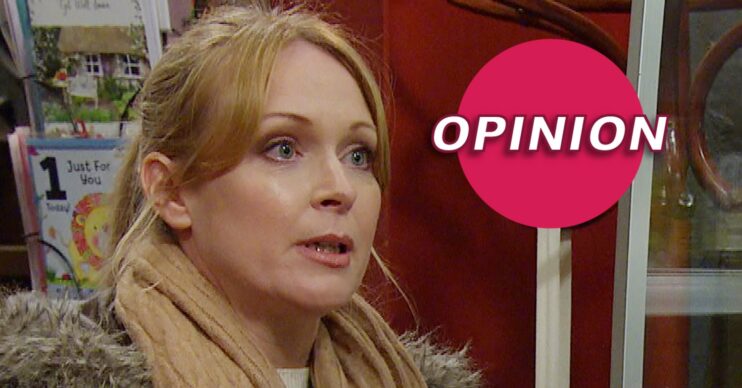 OPINION: Thanks for bringing Vanessa back, Emmerdale, but what have you done to her?

Vanessa is back, but she's not the same

Emmerdale character Vanessa Woodfield recently returned to the village after over a year away, but she appears to have changed quite a bit.

This is what Entertainment Daily writer Charlotte Rodrigues thinks of Vanessa and her return.

Emmerdale: When did Vanessa become so interfering and controlling

Vanessa is back in the village and I was so excited about her return.

However I can’t help but notice a huge change in V – SHE KEEPS INTERFERING IN EVERYONE’S BUSINESS!

When she first came back she began to meddle in Nate and Tracy’s relationship after finding out her girlfriend Fiona slept with Nate.

I know that Tracy is her half-sister and she wanted what’s best for her but their relationship is nothing to do with her.

She then threw a strop when Tracy decided to leave the village for a fresh start.

It’s not up to her to decide what her sister does.

And now she’s interfering in Rhona’s business too!

Despite everything he’s done, Rhona agreed to help and Vanessa did not like her decision.

In tonight’s episode (Wednesday, February 2) she pretended to be Rhona and contacted Marcus to retracted Rhona’s original message about Pierce.

I know Vanessa has her own history with Pierce – he held her captive with her son Johnny after he murdered Graham Foster.

However this isn’t Vanessa’s decision to make for Rhona. She can’t keep trying to take control of situations that aren’t hers.

While I know Vanessa means well and only wants what’s best for her family and friends, trying to take over everything isn’t the way to go about it.

She needs to back off a bit and just let people do what they want or need to do.

Even if Rhona is making a mistake, it’s her mistake to make and not Vanessa’s place to interfere.

She also tried to stop Charity from seeing her son Johnny at one point, but she forgets legally Charity is Johnny’s mother as well and she looked after him and has raised him as her own.

I know Charity isn’t exactly mother of the year, but you can tell she still loves and cares for Johnny.

What do I want next for Vanessa?

Honestly, like many Emmerdale fans, I would like to see Vanessa and Charity reunite. However I don’t want to see them genuinely happy and finally settle down and get married.

Don’t get me wrong I love Mackenzie, but I don’t think him and Charity are the right pairing.

Read more: Emmerdale: How many times has Bob been married? All his wives and children listed

It would also be good to see her get a storyline that doesn’t involve Charity and Rhona and Pierce.

Previously actress Michelle has mentioned she would like to see Vanessa’s mum come to the village.

Honestly I would love to see Vanessa’s mother arrive. I think it would be good to also see Tracy’s mum arrive and explore their feud.

It could bring a bit of much-needed comedy to the show.

As always, I like to end my opinion pieces on a positive note and I would like to say I’m very glad to see Vanessa back on-screen.

Michelle is an incredible actress and think there is so much more to explore with Vanessa.