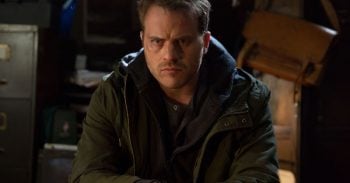 OPINION: Rob Kazinsky’s return to EastEnders can only be hailed as a massive win

Robert Kazinsky’s return to EastEnders as deeply troubled Sean Slater can only be hailed as a massive win. And like all the best things – Fleabag, The Office – it’s been short and not particularly sweet.

The heavy scenes were sublime with blow away performances by Rob and his co-star – the hugely and wrongly underrated Gillian Wright – but man, were they hard to watch. Particularly for anyone who has ever suffered from mental health issues which – according to mentalhealth.org.uk – is one in six of us.

But they look like they’ve done their job. As with the Aidan Connor storyline in Coronation Street exactly a year ago, it’s got people talking about mental health in only the way soaps – that infiltrate our lives without us even realising – can.

Read more: Fans are in pieces over EastEnders Sean storyline

And it showed audiences the flip-side of Aidan’s story, it showed what can happen if we talk about depression and suicide, instead of being all British about it and trying to sweep it under the table. Talking, offloading and reaching out saved Sean’s life.

While the mental health aspect of Rob’s return is obviously – and rightly – the talking point, I think we should take a moment to talk about the man himself and what coming back for this role meant and could mean going forwards.

Sean’s return caused something of a frenzy among soap fans before he’d even set foot back in the Square.

Sean was last seen in 2009 after trying to kill himself, Roxy Mitchell and baby Amy by driving into a frozen lake.

Since then actor Rob Kazinsky’s story is pretty well known, especially this week when most mainstream media have documented it.

In case you’ve missed any of that, here’s a potted version: he moved to LA, landed a role in alien monster-movie Pacific Rim, turned down a role in The Hobbit, snogged Anna Paquin and grew fangs in True Blood, popped up in Captain Marvel, had the lead in a pretty good show that sadly was cancelled after season one (check out Second Chance on iTunes) and generally achieved success where – let’s face it – very few British soap stars have.

So when it was announced this year that Rob would be returning to EastEnders – the show that made him a household name on our little island – a lot of people assumed his Hollywood bubble had burst.

He was even pulled up on Twitter with one person saying she was sad to see he had to go back to soaps, like soaps are something to be ashamed of, a holding pen for actors not quite good enough to do films or (serious face) drama.

As Rob himself pointed out he hasn’t ‘had to go back to soaps’ at all. He’s got five movies out this year (five!). He went back because he wanted to. Because he’s humble enough to be able to say thank you to the show that gave him the chance to show the world what he can do.

“I hope people can see that there’s really no difference. People look down their noses at these things and I’m trying to show that you don’t have to.” 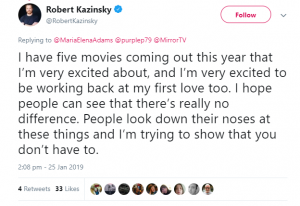 Rob’s gone on to say in an interview with Metro.co.uk that soap snobbery is something that really needs to be stamped out and has openly encouraged other big names who cut their Hollywood teeth in Soapland to return.

“While I was still in discussion with Kate over whether I should come back, I went on some forums just to get what the feel was. I saw a thread of ‘Rob Kazinsky – why would he ever come back?’

“Somebody said it would change the perspective that people have if someone came back who was doing really well to show that it isn’t a stepping stone. It isn’t a place that you should look down on but you should damn well admire it. This is still the best drama that you can get.”

He added that two hours of “intense drama” tackling “social issues” made him think it would be “powerful to go back” and “change how people see this”.

I hope he has. How great would it be to see Ben Hardy (Peter Beale) pop back and have a pint with Ian Beale in The Vic? Or for Sam Strike to come back to Walford and let Linda Carter have a week with her ‘sausage’ without everyone assuming they’d failed.

We may never see Sean Slater in Walford again (although Rob hasn’t entirely ruled it out) and his return may have been shorter than most of us would’’ve liked.

But it packed one hell of a punch.

Rob’s last scenes as Sean air Monday May 6 at 8pm on BBC One.

What did you think of Sean’s return to Walford? Leave us a comment on our Facebook page @EntertainmentDailyFix and let us know what you think!