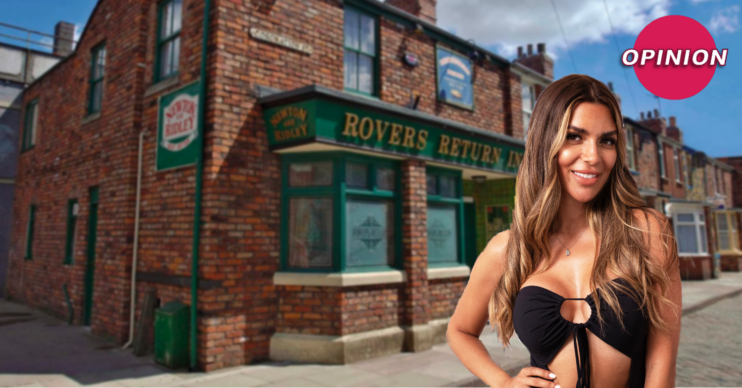 OPINION: Get Love Island Queen Ekin-Su in a soap after the show

Get Ekin on Albert Square

It’s the final week of Love Island and viewers have fallen in love with contestant Ekin-Su.

Bombshell Ekin-Su arrived on day three of the reality series.

She is an actress and has played a serial killer in a Turkish Soap opera.

It’s probably fair to say that Ekin has a good career ahead of her after Love Island.

But I, Entertainment Daily soaps writer Charlotte Rodrigues, don’t just want to see her be an influencer, I want to see her in a soap such as EastEnders, Emmerdale or Coronation Street.

OPINION: Get Love Island’s Ekin-Su in a soap

Love Island has kick-started many careers over the last seven years.

Many of the named have gone on to do presenting work and appearing in shows such as Dancing On Ice.

But I think when Ekin-Su leaves, we need to see her cast in a big soap.

The truth is I could see her in Emmerdale, EastEnders or Coronation Street.

But why would she be good in them?

Why would Ekin-Su be great in a soap you ask? Here’s why…

Ekin-Su is hilarious. I don’t know about you guys but she has really stood out to me this year.

She is coupled up with Davide on Love Island and honestly the pair of them together make me laugh with their jokes and sense of humour.

If she’s naturally this funny, imagine what she’d be like in soaps? She would be great comedic relief.

Ekin-Su is also a very kind a supportive person. You can see she is a girls girl, despite what she may have said when she first arrived about not wanting seasonal girlfriends.

That kind of positivity is needed when you work on a soap.

Actors can be given tough storylines and working on a show like Easties or Corrie, you need to be able to work as a team.

She also has this dramatic, queen-like energy, which again is perfect for a soap opera.

Team Ekin-Su up with Steve McDonald

If I had to say the soap I would like to see her in the most, it would be Coronation Street.

Although I would really love to see her play an actual character, I can imagine a really funny few scenes where Steve McDonald picks Ekin-Su up in his taxi from the airport and needs to take her somewhere in Weatherfield.

But when he’s driving along Coronation Street, his car breaks down.

Tracy sees Steve with Ekin-Su and gets jealous and a fight breaks out. An argument with Tracy McDonald and Ekin-Su? I’d love to see it.

They could even do a little nod to Love Island with Tracy calling Ekin-Su ‘Ekin-Who?’ (Remember the name Nathalia).

I’d also love to see Ekin-Su in EastEnders. I think she’d fit right in and it would be good to see her come in as a regular character.

Perhaps she could be another distant relative of the Slater family

She would definitely make an amazing Slater girl. Imagine Ekin, Kat and Stacey all taking someone down in The Vic.