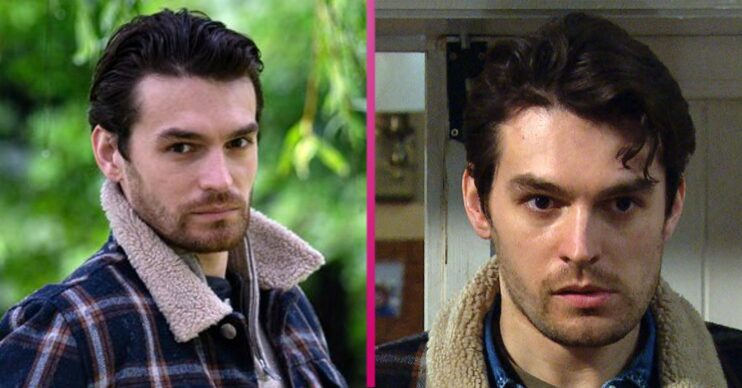 When will Moira's brother get an actual storyline of worth?

Emmerdale bad boy Mackenize Boyd was introduced to the village with great fanfare.

The Scotsman made his debut a year ago alongside Meena Jutla and Aaron’s new boyfriend Ben.

And while Meena has turned out to be a serial killer running around off-ing her enemies for fun, and Ben has occasionally appeared near Aaron, Mackenzie looks to have lost all steam.

What is he actually doing in the village?

It all started off so promisingly.

A hunky new addition – a farmer to boot – arriving in the village with a mysterious secret and a connection to Moira Barton.

Sounds thrilling! And that’s about the extent of it.

Putting aside the fact his age makes about as much sense as anyone investing actual money into The Woolpack – Mack doesn’t fit in.

He’s too young to be a brother who would remember Moira and he’s too old to be her secret son.

No-one wants a 30-something stepson hanging around making barbs either. Ask Cain who’s warmed to him about as much as the viewers.

Mack’s just sort of slithered in and taken his place at the family dinner table without being a member of the family.

He spent his first six months flirting with Aaron Dingle and delighting fans with a potential less-toxic Robron situation.

But even that’s now been forgotten because heaven forbid they have any couples with chemistry in the Dales.

Instead he’s become the latest in a long line of men to distract Charity Dingle from her life.

They’ve made eyes at each other over a cafe table and scammed each other like all good romcoms.

The pair even had a deeply unfunny picnic in the woods where he ended up falling over in a bush. Oh the hilarity.

Though with Charity’s ex Vanessa Woodfield soon to head back to the village, even Mack’s relationship is going to be pointless.

Lawrence Robb is a talented actor – and he has charisma in spades – but he’s being completely wasted.

Viewers know it and expect more. We demand more.

Sort it out, Emmerdale.