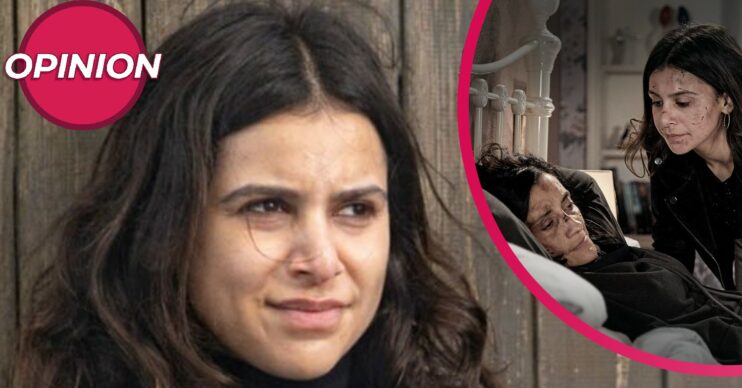 The killer nurse is exactly what the soap has been missing

Emmerdale has had a bad run of villains over the last few years – but Meena Jutla has changed all that.

She brilliant, funny, completely psychotic and we absolutely love her.

Although Emmerdale has not confirmed her exit, Paige Sandhu, who plays her has spoken about how she will “miss everything about” Meena when she goes.

It seems likely, then, that her end is imminent, especially as she either has to murder her sister or free her.

The problem for Emmerdale is that they have always had their iconic character looming over the show in Kim Tate.

Nothing could ever match her because she was legendary and all who came after her were compared to her.

And none of them stood up to her.

But now she’s back and has been humanised and updated and so she’s a different kind of villain.

She’s the vampire in the castle who needs to keep the villagers safe so she can feed off them.

And that creates a vacuum for a new villain – and we have been given Meena.

Now, she’s not that original (killer nurse Emma Barton says hello) but she is exactly what Emmerdale needs now.

From one minute to the next you don’t know whether she’s going to casually leave her brother-in-law to die in a car accident, or shove a teenage girl over a bridge to her doom.

She kills because she can – and when she needs to.

There’s no messing around with dull financial motives. If she wants you dead, she’ll kill you.

If you’re a threat to her, she will kill you.

While those before her have all been killers of convenience, Meena enjoys the killing – and it shows on screen.

And can anyone imagine Meena backing down to the likes of spoiled rich baby Lachlan if he tried to kill her?

She’d finish him off while painting her nails.

It’s not time for Meena to leave

Is it really time for Meena to go? Surely there’s still some kills left on her list?

Keeping Manpreet and Vinny held hostage could be her fatal mistaken though.

Why would she not just murder them like she has everyone else? She’s never batted an eyelid before, so why now?

Is it because Manpreet is her sister? Meena’s made it perfectly clear what she thinks of family loyalty, that’s for sure.

But either way, Emmerdale has such a success on their hands shouldn’t they keep her around for a bit longer? She’s so entertaining and there’s plenty of soap deadwood she could get rid of before she goes.

It looks like things are coming to a head next week when she resolves to kill Manpreet and Vinny and locks them in the barn with exhaust fumes coming in.

It seems like it could go one of two ways: Manpreet and Vinny could both die, leaving Meena on the loose a little longer.

Or they could escape, meaning her reign of terror is over.

However, if they do survive, does it have to be the end of Meena? We’ve had rapist Pierce Harris return after being banged up. Could there be one last hurrah still for Meena?

All soap icons deserve a big farewell – let’s leave her in it a little longer to make sure Meena gets it.