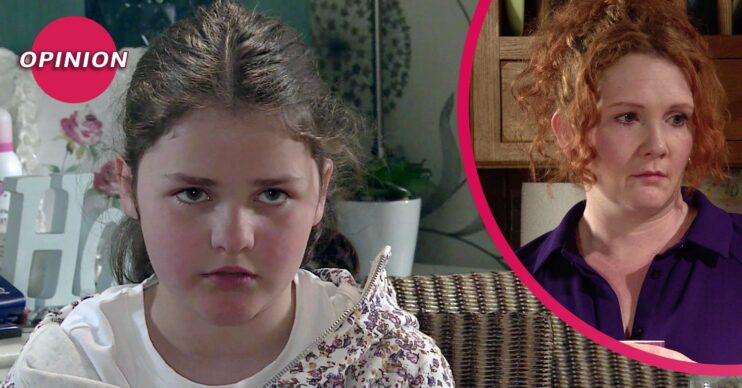 OPINION: Coronation Street: ‘Hope MUST go to young offenders for starting the fire’

It's time she was properly dealt with

Coronation Street character Hope could be sent away for starting the fire at the salon flat.

Recently it was revealed 10-year-old Hope was the one behind the blaze that put Alina in hospital.

The school girl was upset that her dad Tyrone was having a baby with her and set fire to the cot. However she was unaware that Alina was in the flat.

In tonight’s scenes (Wednesday, August 18) Hope was questioned by police and admitted to starting the fire.

Later, Fiz was told that Hope is being charged with reckless arson. While she is only young, there is a chance she could be sent to a youth detention centre for her crime, but should she be sent away?

This is what Entertainment Daily soap writer Charlotte Rodrigues thinks.

Hope Stape is clearly a troubled child. In the past, it has become clear that she has a lot of behaviour problems, but the fire at the flat was too far.

Viewers know Hope is no stranger to starting fires and this her fourth fire related incident.

I understand Fiz is a parent and doesn’t want to see her child locked up, but letting her get off scot free will only make her worse.

I’m not saying Hope needs to be locked up forever and should never be let out, however she doesn’t seem to know that her actions have consequences.

In a recent scene she said she wasn’t sorry for starting the fire. While I’m not a psychologist, I would say there’s something very disturbing in the fact she appears to have a lack of empathy for others.

She does need to go to young offenders and learn that starting fires isn’t a normal thing to do. However she also needs some form of therapy.

‘Fiz is too soft on Hope’

I’ve noticed that Fiz is a bit too soft on Hope at times. In previous seems we’ve seen Hope make demands to Fiz and Fiz talk back to her calmly.

Fiz needs to stand her ground a bit more. She shouldn’t be letting Hope talk to her the way that she does.

I’m in no way slamming Fiz as a parent as she has done a good job with her children and Hope’s behaviour isn’t her fault.

However she needs to realise that Hope will only get worse if she continues to let her get away with her behaviour.

The future for Hope

I have seen some comments saying that viewers believe Hope could become a serial killer.

While I do believe there’s some psychological issues there, I don’t think she would go as far as to kill.

That being said, she has intentionally hurt her cousin Joseph before, showing that maybe she could hurt people in the future.

She’s gotten away with too much for far too long. Let her face the law.