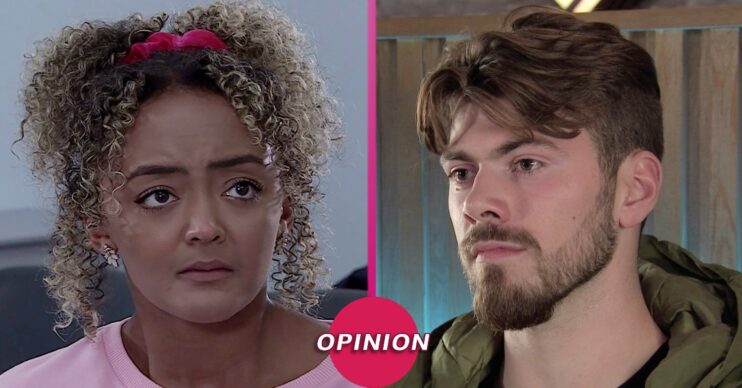 OPINION: ‘Coronation Street has destroyed what should have been a beautiful love story for Emma and Curtis’

Curtis should come back

Coronation Street characters Emma and Curtis have split up, but a potentially great love story has been ruined.

Emma told Curtis to leave Weatherfield after being lead to believe he stole £100k of charity money.

Curtis said he didn’t take the money but due to his past lies about his heart condition Emma didn’t believe him.

But what does Entertainment Daily soap writer Charlotte Rodrigues think of this storyline? Keep reading to find out.

Coronation Street: ‘Curtis and Emma’s could have been a beautiful love story, but it’s ruined’

Coronation Street needs a great romance story and this could’ve been it, but it’s been ruined.

Us fans of the show know Emma is a hopeless romantic and let’s face it, has had a string of dating disasters.

Emma never really found the one until she met Curtis and when they both met, it was lovely.

It was sweet to see her interested in someone who was clearly fully interested in her back. It could’ve been a beautiful romance story with the happy ending that viewers want.

None of this ‘doom and gloom’ as I see so many of you soap fans say (yes I see your tweets!).

However it was taken down a different path and it turned out Curtis has a factitious disorder and it spoiled that romantic love story so many of us wanted for Emma.

Don’t get me wrong, it would be interesting to see a character with a factitious disorder, but I definitely wanted just a simple love story for Emma.

But it’s not too late to fix it…

Coronation Street: ‘Curtis is unwell, we need to be more understanding’

I have seen a lot of people unhappy with Curtis for the way he lied to Emma and of course, lying about being terminally ill is wrong.

Although I wish this storyline had played out differently, I accept it for what is is now.

Now us as viewers need to be more understanding of Curtis and what he’s going through. He is not physically ill, he is mentally ill.

I don’t think he’s a bad person at all, but I will be honest, if this is how they’re ending the storyline I will not be happy.

Again I know Curtis lied, but I hope Corrie can turn this around and make it a proper love story with Emma supporting him and getting the wedding she so badly wants.

Let’s face it, no relationship is without it’s challenges.

‘This storyline needs to be finished responsibly’

If Corrie don’t bring Curtis back I think that’s kind of irresponsible on their part (Corrie I love you, but hear me out).

You can’t start a storyline about a factitious disorder and not finish it. We need to see Curtis getting the help and support he so desperately needs.

This is so those who actually have a factitious disorder can see they can get help and that there is support out there for them.

If Curtis is completely rejected by everyone for his mental illness, it could send the wrong message.

Now I have nothing but respect for the writers and storyliners at Coronation Street, they’re incredible.

And I have faith this storyline will be revisited. I hope they do bring Curtis back and see things through.

Also Emma deserves some happiness in her life. The poor girl has been through enough. I know she doesn’t exactly make the best decisions but who does?

Praise for the cast and Corrie team

As always I would like to end this by saying this is no way me bashing the soap. I’ve watched Corrie since I was little and it’s always been one of my favourite shows.

I just want them to bring this storyline to the right ending and I have every faith that they will.

I would also like to add that Sam Retford, Alexandra Mardell and Simon Gregson have done a great job on this plot.

Sam is a great actor. I was a huge fan of him in Ackley Bridge so I was thrilled to see him come into Corrie. I hope this isn’t the last we see of Curtis and that there is more to this plot.