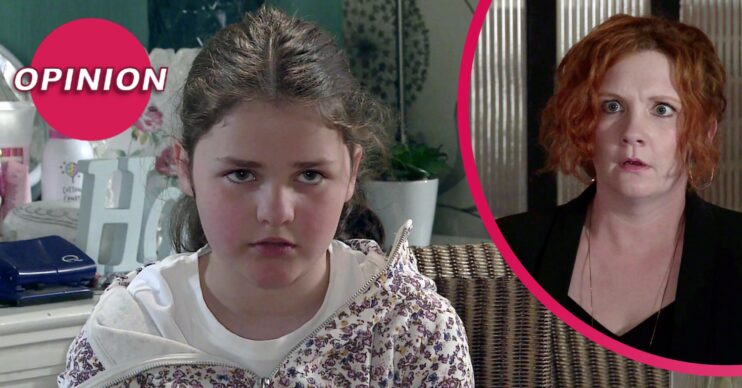 OPINION: Coronation Street – ‘Fiz needs to stop protecting Hope and let her face the consequences of her actions’

Time for some tough love

Coronation Street character Fiz is going to extreme lengths to try and protect her daughter Hope after she started a fire, but should she let her face the consequences?

This week, a fire started at the salon flat. Pregnant Alina Pop was caught up in the blaze.

Although she got out and survived, she and Tyrone were devastated when they were told Alina had lost their baby.

Viewers know that Hope broke into the flat before the fire to retrieve a toy dinosaur.

However in tonight’s episode (Friday, August 6) Fiz found out her daughter had taken Alina’s keys and started the fire.

Fiz told Tyrone that it was their daughter who started the fire and he was gobsmacked.

Hope admitted she started the fire, but said she didn’t realise Alina was in the flat at the time.

While Tyrone wanted to report Hope, Fiz begged him not to, fearing she’d be taken away from her.

But what is the right thing to do in this situation? Here is what Entertainment Daily soap writer Charlotte Rodrigues thinks.

Coronation Street: Fiz and Hope’s past

Over the last few years, Coronation Street viewers have seen a lot more of Hope as the character has been given stronger storylines.

Towards the end of 2018, fans will remember that Fiz took Hope to a school in Birmingham with a specialist behaviour unit.

This was after a series of bad things Hope had done, including setting their trampoline on fire.

After returning from the behaviour unit, she then started a fire at the Underworld Factory building site.

She then also set a fire in her garden.

Are you starting to see a bit of a pattern here?

Of course, now it’s been revealed she definitely did start the fire at Alina’s flat.

Coronation Street: ‘Fiz needs to let Hope face the consequences of her actions’

While Fiz argued that Hope didn’t know Alina was home and didn’t intend to try and harm her, it is becoming increasingly obvious that Hope has some serious issues.

I can’t comment on the psychological side of things or diagnose Hope as I am not a professional, however judging by the fact this is her fourth fire-related incident, I’m going to say Hope could potentially be a pyromaniac (or at least that’s where the writers are going with her character).

Every time she does something to hurt someone, she shows a severe lack of remorse, which is even more concerning.

While I am not a parent myself, I do think that Hope needs to be punished for what she’s done – and given essential help.

I do feel for Fiz, however as she pointed out in tonight’s episode, Hope is over 10, meaning she is over the age to be arrested and charged for her crimes.

As this isn’t the first time she has done something incredibly dangerous, I do believe Fiz needs to stop trying to protect her and let her face the consequences of her actions.

If you keep letting your kids get off Scott free every time they do something bad, they will never learn.

And in Hope’s case, it’s clear there is something more going on here and she does need some form of help.

The future for Hope – Are they trying to make her like John Stape?

As fans know, Hope is the biological daughter of serial killer John Stape.

At times it feels like the writers are trying too hard to make it known that she is John’s daughter.

John died shortly after his daughter’s birth, however Hope knows that Tyrone isn’t her biological dad.

Of course, children can take after their parents, but when Hope plays up, people are quick to point out she is John’s daughter.

However the fact her father was a killer shouldn’t be used as an excuse for her behaviour. In other words Fiz, GET HER SOME PROPER HELP!

While this storyline is a tough one, I think we all need to take a moment to praise Isabella Flanagan who plays Hope Stape.

Isabella has been in the soap since 2017 and at only 10 years old has had some very challenging storylines.

She always gives a fantastic performance and let’s face it, she really makes us fear Hope.

I can’t wait to see what’s next for Hope.