Fans aren't impressed and neither are we

Coronation Street has had a good run recently – but it is now airing one of the worst storylines it has ever attempted with Faye and Emma.

In years gone past there was nuance to a plot with weighty acting and powerful twist and turns to back it up.

That’s not exactly happening with this storyline.

Cast your mind back to last year and the who attacked Adam Barlow mystery.

It was revealed that Faye Windass had done it – after thinking he was evil boss Ray Crosby.

Avoiding the ridiculousness of that situation, Faye quickly went to prison awaiting trial and we didn’t hear from her in six months.

Until, that is, Ray miraculously admitted to sexual assault and Faye got out of prison under bail.

Hardly the best start to a storyline – but it got so much worse.

Within weeks of her release, Faye has moved in with Corrie’s own Jessica Fletcher – PC Craig Tinker – and ended up KILLING A MAN.

During a driving lesson with – drunk – Emma Brooker, Faye ran over a pensioner.

They helped him, stole his crutch and left him to die alone in his flat.

No, really that’s what happened.

Coronation Street needs to get a grip with its plots

And now instead of just coming clean, Faye and Emma have set about appearing in their own French farce as they try to stop Craig from discovering they – laugh out loud – killed a man.

And let us not forget the ridiculous crutch hunt going on with Craig using police resources for a £20 bet.

It is one of the most bizarre and misjudged plots ever to exist on the cobbles.

There is no doubt that there could be a good story here – but it’s with the wrong characters. 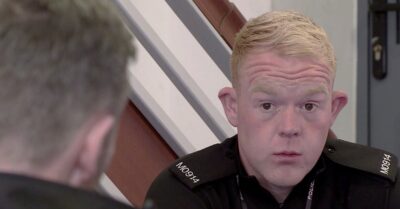 Craig is nothing more than a General Purpose Cleaner version of a copper – he doesn’t do specifics.

And these actors are limiting the plot development and believability.

They cannot pull off the necessary nuance that this storyline requires.

Read more: Coronation Street fans all saying the same thing about Craig and his bread

Even Alexandra Mardell, who has proven herself with much meatier plots, is lost in the nonsense of this storyline.

End it now, Corrie. We beg you.