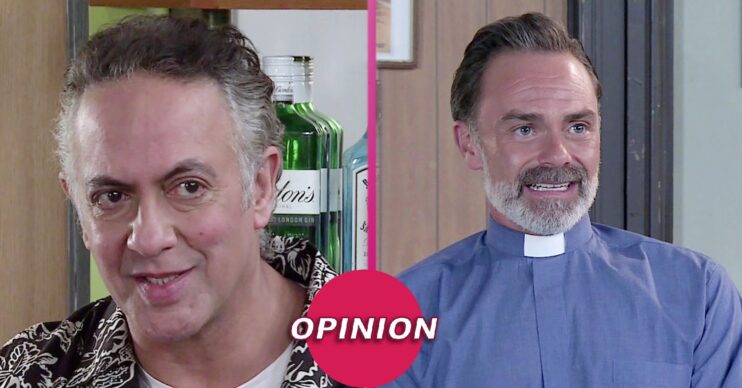 Recently Dev’s son Aadi began dating Summer Spellman, and yesterday he was upset when Dev didn’t seem interested in his relationship with her.

Dev decided to throw a dinner party, inviting Summer and her godfather, Billy, along to prove that he was invested.

During the scenes that followed, Dev and Billy both got hilariously drunk and began discussing Summer and Aadi’s relationship.

Increasingly drunk Dev tried to bring up the conversation of sex, wanting to make sure they were both being safe.

As Dev yelled, “Making love is one of life’s greatest pleasures” Billy threw his hand up in agreement.

Horrified, Summer and Aadi made a quick getaway – while the nation’s reproductive bits shrivelled up and died.

But could there be more to come for Dev and Bill? Here’s what Entertainment Daily soap writer Charlotte Rodrigues thinks.

Last night’s scenes were just what Corrie viewers were needing. A bit of comedy to make us smile on a Monday night.

It was great to see Billy involved in some funny scenes after his most recent storyline.

After his horrifically painful split with Todd, Billy’s not had much air time. So it’s good to see him back actually enjoying himself – and reminding us that he has a fantastic fun side.

Meanwhile, recently, Dev has been involved in some of the trial scenes, as his daughter Asha gave evidence against her ex-boyfriend Corey.

Now if you want to hear my opinion on the monstrous outcome of that, you can do so by clicking here.

Otherwise, back to Billy and Dev.

The scenes were brilliantly written, so Corrie-on-comedy and perfectly timed to add some humour in amongst the superbly heavy, dark scenes we’ve had recently.

Of course I’ve seen some complain that the scenes weren’t funny on social media (sighhhhh), but then again these same people complain that scenes are too sad and depressing.

You all keep saying you want more comedy, well here it is. ENJOY IT!!!

Let’s all hail this great new duo and we definitely need to see more of them together.

What I’d really like to see is them going on a big night out in Manchester with some of the other ‘funny bones’ street residents such as Steve McDonald, Tim Metcalfe, Gail Platt, Audrey Roberts and Mary Taylor.

During this Billy and Dev end up getting so drunk they wake up in bed together the next day, unable to remember the night’s events.

(Corrie, if you want some more ideas on this, call me, please!)