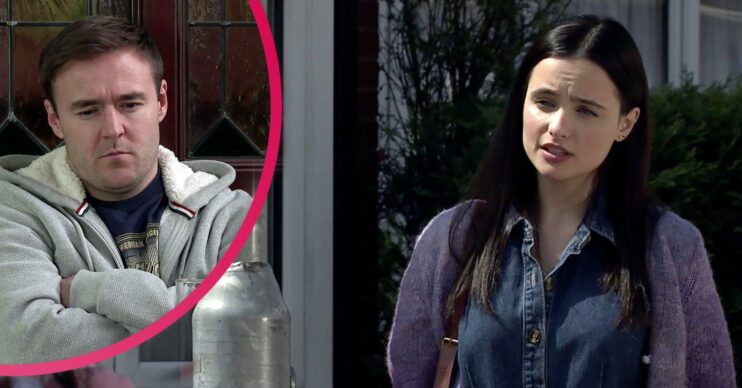 Coronation Street began a new storyline this year which saw Tyrone Dobbs fall for Alina Pop whilst he was engaged to Fiz Stape.

However he decided to leave Fiz and began dating Alina. He ended up moving into Alina’s flat and the pair seem to have got very serious very quick.

But has this new coupling ruined Alina?

This is what Entertainment Daily soap writer Charlotte Rodrigues thinks about Alina and her relationship with Tyrone.

The two began spending time together earlier this year and Alina was the first to admit her feelings to Tyrone.

He ended up reciprocating those feelings and cheating on Fiz by kissing Alina.

However this storyline seems to have made Alina out to be completely different to the character we met nearly two years ago.

When we first met Alina, she was being forced to work in a nail bar and was a victim of human trafficking.

She was helped by Seb Franklin but decided to return home to Romania to be with her family.

She later came back to the cobbles to find her ex-boyfriend Seb was now with Emma Brooker.

When she returned Alina made it clear that she didn’t want to break up new couple Seb and Emma and the last thing she wanted was to cause problems.

However a year later she’s more than happy to kiss a man who’s been with someone else for years and break up a family.

It doesn’t seem to make sense that her morals have changed so much within a short space of time.

I’m not saying she’s completely at fault, but I always say if someone has a partner, you leave them alone!

Tyrone and Alina as a couple

I understand that Tyrone and Alina are a new couple and are still in their “honeymoon phase” but there are some things that really don’t sit right with me.

First of all, the constant sex. As I said, it’s a new relationship, but it just seems to be their answer to everything, even arguing.

I can’t help but feel for Emma living in that flat with them.

Secondly the age gap. Now I have no problem with the age gap as they are both consenting adults.

But speaking as someone who is pretty much Alina’s age, a 38/39 year old man will be in a different stage in life to a 23 year old.

It does work for some couples, but do I think it will work for Ty and Alina? Nope.

In my personal opinion there is nothing wrong with letting your partner maybe pick out an outfit they’d like to see you in, but the fact she’s choosing a load of new stuff for him to wear is a big red flag.

He’s a grown man, he doesn’t need someone to dress him. There’s definitely a bossy side to Alina that we didn’t see before this storyline and I don’t like it.

The good side to Alina

Whilst there are parts of Alina’s character that I personally don’t like, overall I think she is kind-hearted and does care about Tyrone, Ruby and Hope.

However I would’ve preferred to see her get together with someone around her own age – I even think Craig and Alina would’ve made a good couple.

Read more: Coronation Street: Who buys the Rovers Return? Fans think they’ve figured out who will be the new owner

I also want to add that I think Ruxandra Porojnicu does a fabulous job playing the character, but I just hope to see more for Alina in the future.

Perhaps we could meet some of her family?