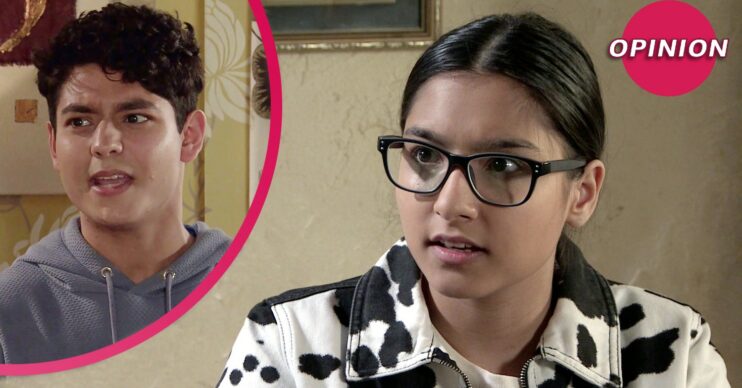 "Asha has a lot of growing up to do"

Coronation Street character Asha has come to the forefront of the ITV soap over the last two years as she’s been given bigger storylines.

In last week’s episodes Aadi called his sister a brat and after tonight’s episode (Tuesday, November 16) I have to say, I agree with him.

In tonight’s episode Dev told Asha that Aadi’s friend, Kelly, would be staying with them.

Asha didn’t like it, as Kelly was there when Corey killed Seb, which I can completely understand.

However she threatened to move out if Kelly stayed. When Dev pleaded with her not to be like that, Asha stormed off to her room. But is her bratty behaviour becoming too much?

This is what Entertainment Daily soap writer Charlotte Rodrigues thinks.

Coronation Street: ‘We need to see more of Asha’s vulnerable side’

I want to start off by saying Asha has had some really fantastic storylines with the skin-lightening and sexting plot.

We really got to see Asha’s vulnerable side and it was incredible to see Tanisha Gorey finally get a bigger storyline in the show.

However over recent months, Asha has started to become more spoilt as she got more and more attention from Dev.

I’m not saying Dev necessarily favours Asha, but he has definitely given her more of his time and attention. I understand that’s because maybe she has needed more support, but now it’s like she expects to get her way constantly.

A solid example is her persistence to try and spend time with Nina, even though she wasn’t ready.

After Seb died, Nina was obviously grieving and she made it clear to Asha she only wanted friendship.

However Asha confessed her feelings and seemed to insist on spending time with Nina when it was clear she wasn’t ready to move on to a new relationship.

It was almost as if she couldn’t deal with not getting her own way.

Coronation Street: ‘Asha has a lot of growing up to do’

Asha has a lot of growing up to do, however I take into account she is still young.

Maybe as she gets older she’ll learn that she can’t just have a tantrum to get her own way and realise that her behaviour isn’t acceptable.

As always I would like to end this piece by saying this article is in no way me bashing Tanisha.

Tanisha Gorey is an incredible actress and I’ve really loved seeing Asha have more of a role on the soap over the last couple of years.

I would like to see another big storyline for Asha. As she’s always threatening to move out, maybe she could actually move out of Dev’s house.

But in all seriousness, Tanisha plays the character very well and I can’t wait to see Asha grow up and develop more in the future.