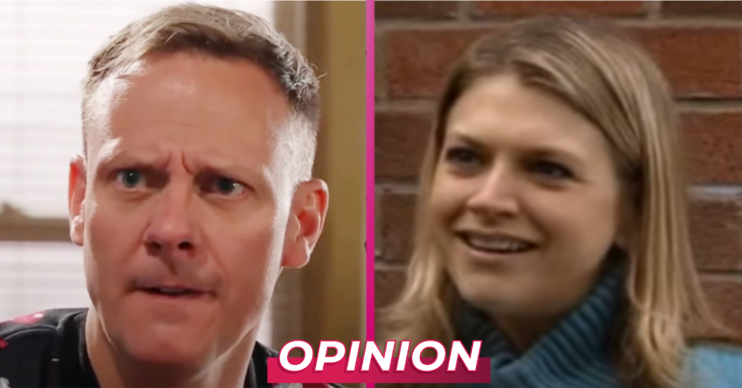 In December Coronation Street will be celebrating 60 years on-screen. Over the six decades, there have been many brilliant storylines. However there’s always room for more! These are six Corrie storylines that Entertainment Daily soap writer Charlotte Rodrigues wants to see. 1. Faye’s daughter to return Fans of Coronation Street will remember Faye’s pregnancy storyline […]

In December Coronation Street will be celebrating 60 years on-screen.

Over the six decades, there have been many brilliant storylines. However there’s always room for more!

Fans of Coronation Street will remember Faye’s pregnancy storyline in 2015 when she became the youngest soap mum.

But as she struggled to adjust to motherhood, she allowed her daughter, who she called Miley, to go and live with her dad Jackson Hodge and Jackson’s parents.

Jackson’s family then moved to Canada, taking Miley with them. Faye didn’t see her daughter again until nearly two years later when she ran into Jackson and Miley, who were back in the UK for a visit.

Over the last year or two, it seems Faye has started to fade into the background. More recently she has been involved in the Geoff and Yasmeen storyline as she wants to stand by her granddad.

But I think it would be interesting to bring Miley back to see how Faye would handle parenthood now she’s an adult.

Plus Ellie Leach is an amazing actress, we need to see more of her!

A lot of storylines in soaps can be dark as they want to show real-life issues and struggles that people face.

However it would be good to see a storyline where one cobbles resident wins big money. Perhaps one of the youngsters could buy their first lottery ticket on their 16th birthday and win big?

Maybe they could start up a new business on the cobbles? It would even make for a great exit storyline if someone wanted to go and not be killed off.

In 2011 Tyrone Dobbs began dating Kirsty Soames. She fell pregnant and together they had a daughter named Ruby.

But Kirsty began abusing Tyrone and would often hit him. She began to turn things around claiming he was the one hitting her.

However, when the police officer snapped at baby Ruby, she realised she could end up hurting her. She confessed in court that she lied and Tyrone got custody of his daughter.

Kirsty went to prison for a year and was released in 2014. However she never returned.

It would be interesting to see Kirsty come back and want to see her daughter – who will have no memory of her biological mum.

Of course, I wouldn’t want to see her get back together with Tyrone, but I would like see how Fiz and her man handle her coming back to see Ruby.

Currently Leanne is going through every parents worst nightmare, finding out her son is terminally ill.

It would be good to see Janice come back to support her former stepdaughter.

I grew up watching Janice on-screen and she was always one of my favourite characters. I think she could provide good support for Leanne and also bring back some humour to the show.

If there’s one thing I love in soaps it’s a loud, over the top family.

EastEnders have the Taylor family, who I personally believe was one of the greatest additions to the BBC soap.

I would love to see a family similar to the Taylors arrive in Weatherfield.

Usually when you bring in a family such as the Battersbys or the Taylors to a soap, viewers initially don’t like them. But they soon start to grow on you and you become attached to the characters.

6 Bring back Violet and Dylan Wilson

Violet is an old friend of Sean Tully. Together they have a son called Dylan. However Violet and Dylan left Weatherfield in 2008 and they were last seen on-screen in 2011 when Sean visited her in London.

A short while ago, Sean actor Antony Cotton mentioned a storyline where someone from Sean’s past would return. Of course viewers began to speculate it was Violet.

Although the storyline doesn’t seem to have gone ahead yet, I think it would be great to bring back Sean’s son.

First of all it would give him a proper storyline and Anthony Cotton another chance to showcase his acting muscle and second, Violet was a fan favourite. I’m sure her return would make a lot of viewers very happy.