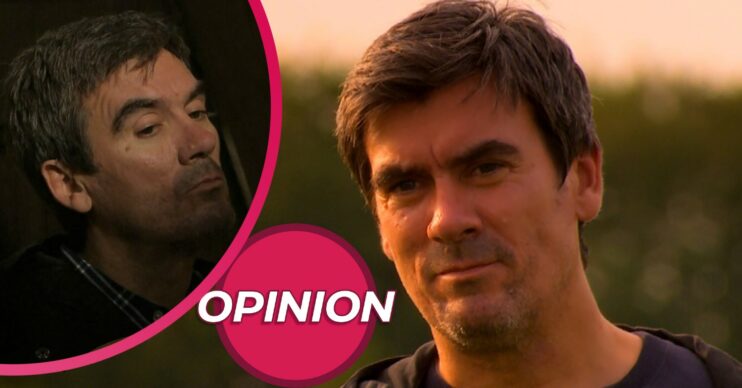 The character is in serious need of rescuing

Cain Dingle in Emmerdale is a soap icon. The bad boy with a heart in there somewhere has graced our screens for 22 years, but lately something has happened to him – and it’s not good.

It feels like a merry-go-round of Cain being brooding, Cain being threatening, Cain interfering, Cain whinging.

He was once the greatest character and he can be again if Emmerdale follows our five point plan to save Cain Dingle.

1. Give Cain Dingle a friend in Emmerdale

Where is Liam? He and Cain struck up a watchable and interesting friendship last year.

Cain helped Liam with the allotment in Leanna’s memory and their bonding was really touching. It proved Soapland doesn’t need to be all murders and gangsters to be enjoyable.

Liam even turned to Cain when he found out Meena had killed Leanna. He asked Cain to murder Meena, but Cain refused.

But now Cain’s at war with Al and is at risk of losing his family, and yet where is Liam?

Cain needs a friend right now – why has Emmerdale totally forgotten this genius pairing a mere months after forming it?

Don’t get us wrong, we love Zac, he’s part of the Emmerdale furniture.

But in order for Cain to progress and take up his rightful place as head of the Dingle clan, Zak must go.

Cain needs a new focus, he needs to belong again. And what better place than leading the show’s legendary family?

Zak’s death would send the Dingles into a spin and Cain could be the one to put them back together.

3. Bring the passion back with Moira

What has happened to the soap’s sexiest couple?

Cain and Moira were absolutely made for each other and their sexual tension electric.

And now? Moira does the washing, while Cain sits around feeling sorry for himself.

Enough of the humdrum intricacies of married life – where’s their passion? Their fire? The things that made them, well, them?

4. Or give him an affair with Rhona!

Jeff Hordley (aka Cain) and Zoe Henry (Rhona) may not want it to happen, but we do!

Imagine the brilliance if Cain and Rhona hooked up on-screen. Their chemistry would be sensational and the fallout would be huge.

Rhona and Moira are friends so it wouldn’t go down well.

Come on, Rhona deserves more passion and fire than slippers and supper with Marlon can provide.

And it nearly happened once before when Rhona first arrived in the Dales in 2002. It’s 20 years later – surely now’s the time?

5. End the Al plot – and give Cain a worthy opponent

Al versus Cain is not working.

They are both coming across like little boys throwing their toys out of the pram.

Neither of them are winning this fight and we’re not rooting for either one of them.

Honestly? We just don’t care about this feud. We don’t even really know where it’s come from (something to do with Debbie, perhaps?), so it’s time to quietly finish it.

In reality Cain Dingle wouldn’t even be remotely bothered by the likes of Al Chapman.

Cain needs to do something huge, something truly bad to make his mark back on the show. He needs to see off Al for good – then we’d all have something to celebrate.

He then needs a proper foe. A worthy opponent who can take on Cain Dingle, but make him even better than before.

How do you think Emmerdale can save Cain Dingle? Leave us a comment on our Facebook page @EntertainmentDailyFix and let us know what you think!