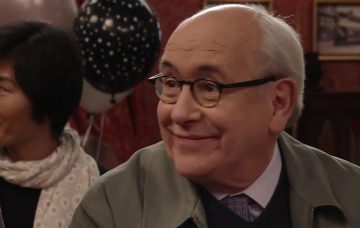 Norris Cole return to Corrie is only a temporary one

The soap door is open for full-time comeback, though

Norris Cole’s return to Weatherfield is not planned to be a permanent one.

Actor Malcolm Hebden, 78, has been away from Weatherfield’s cobbles since suffering a heart attack last year.

He spent much of December last year in an induced coma before undergoing a groundbreaking op that saw his heart wrapped in tissue taken from a cow.

However, while he will resume his role as resident nitpicker Norris in 2019 with a storyline that could see Rita Tanner gazumped for the Kabin, Corrie’s producer has described the comeback as a “cameo return”.

Speaking to journalists, Iain MacLeod hailed the busybody character as part of the ITV soap’s fabric.

He also teased that veteran soap character Norris will play all his hits as he picks up where left off with his circle of Corrie pals, even though Malcolm’s reappearance in the series will be a brief one.

Iain said: “He’s back for a short stint in a little sort of cameo return in the hope we can have him back permanently in the future.

He continued: “[Norris is] on that list of Emily Bishops of characters who are so Corrie that the show doesn’t feel correct without them in there. Soap characters come and go, but I am reading bits in the scripts where I know Norris would have something to say.

“His return story is pleasantly silly and revisits his relationship with Mary in a meaningful way. I hope Malcolm likes it, he’s not read the script yet.”

According to reports, gossip Norris will turn Rita’s life upside-down on his return when he tries to flog the newsagent’s from under her feet.

It is thought Norris – who bought up Rita’s share of the business in storyline when actress Barbara Knox took a break from the soap in 2009 – will sell the Kabin to Brian Packham and Cathy Matthews.

A TV insider reportedly told The Mirror Rita will not give up her beloved shop without a fight.

They said to the newspaper: “Even when Norris bought it off her, she remained working there and has been holding the fort all these months while he has been away.

“Brian and Cathy tell Rita they have done the deal to buy the Kabin.

“But until she has seen the contract she’s having none of it. Let the Kabin war begin.”

Norris was introduced to Coronation Street in 1994 and became a regular character in 1999.