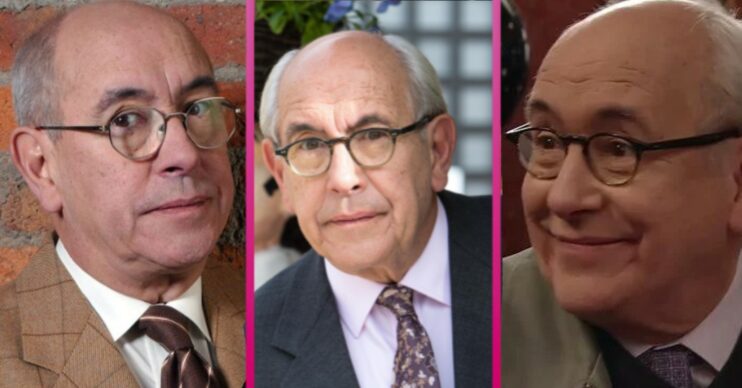 Norris was part of Corrie for three decades and appeared in 1700 episodes!

Norris Cole in Coronation Street was the nosy newsagent who tormented Mavis and Derek Wilton, worked alongside Rita Sullivan in The Kabin for 20 years, and who became firm friends with Mary Taylor, and even her husband for a short while.

Norris said goodbye to the cobbles back in 2020, and now Corrie fans are readying themselves for the sad news that the character has been killed off-screen, ensuring he’ll never set foot on Coronation Street again.

Norris’s friends will get word that the former newsagent has suffered a stroke and rush to the hospital to be by his side, but sadly they won’t make it in time and instead they’re given the sad news that Norris has passed away.

Norris Cole in Coronation Street was played by actor Malcolm Hebden. When he took on the role in 1994, it wasn’t the first time he’d been seen on the cobbles.

Malcolm first appeared in Corrie back in 1974, playing Carlos. He was a Spanish love interest for Mavis Riley, who was swept off her feet by the exotic chap, only to be devastated when he admitted he just wanted a British passport.

When he returned as Norris in the 1990s, it wasn’t intended to be a role that lasted as long as it did. But Malcolm, who describes Norris as ” a little nosy prat” made the character his own and viewers took Norris to their hearts.

Malcolm, who’s 81, suffered a heart attack in 2017 and took some time away from the show. After he recovered he made some guest appearances, with Norris moving to retirement complex Still Waters. But last year Malcolm decided to retire and now Norris is going to be given a moving send-off on-screen when he passes away.

Norris was an old friend of Derek Wilton. He arrived on the cobbles and immediately began rubbing everyone up the wrong way with his nosiness and love of gossip.

But though he left for a short while in the late 90s, he soon returned and became part of the Corrie furniture! He and Rita worked together in The Kabin for many years, often leaving viewers weak with laughter at their fond arguments and banter.

Norris has had so many brilliant moments on the Street that it’s hard to pick a favourite! But some of his highlights include teaching Roy Cropper to dance – and later teaching Mary.

He also dressed in drag to entertain the Rovers with his best Eartha Kitt impression.

And he was part of the crew that helped the Commonwealth Games run smoothly when they took place in Manchester in 2002.

In fact, so popular was Mr Cole’s role in the games that the volunteers became known as Norrises!

Mary Taylor arrived in Corrie as a friend who Norris had got to know thanks to their mutual love of competitions.

Their friendship soon became one of the show’s best-loved partnerships. It even survived a bumpy patch – to say the least – when Mary kidnapped Norris and held him hostage!

The pair even tied the knot but it was really only to win a Mr and Mrs competition organised by Radio Weatherfield.

Though the pair were known for their comedy storylines, when Mary opened up to her friend and told him she’d been raped as a 14-year-old schoolgirl and given birth to a baby, it was clear actors Malcolm Hebden and Patti Clare could cope with hard-hitting drama, too.

When Norris left Coronation Street in the back of a taxi, his last words were: “Goodbye old friends.”

We’re definitely going  to miss him! Do you agree? Leave us a comment on our Facebook page @EntertainmentDailyFix and let us know what you think.