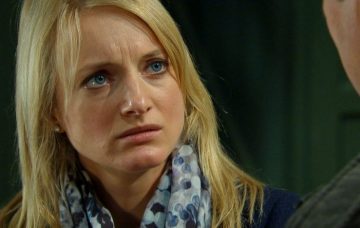 Emmerdale’s Nicola King showed off her dramatic new look this week – but not all fans were behind the image transformation.

Nicola debuted a striking new ‘do when she arrived at Home Farm with a plan for boss Graham Foster.

But it wasn’t her actions that raised eyebrows – it was her barnet!

Read more: Battle of the Soaps: Coronation Street vs Emmerdale

The long-standing character, played by Nicola Wheeler since 2001, has ditched her trademark blonde locks in favour of a bright crimson look.

As well as the red colour, Nicola’s style was a choppier, layered bob.

Priya Kotecha was quick to notice the dramatic change, as were the fans who rushed to express their opinion on social media!

Read more: Did this moment between Emmerdale’s Graham and Noah prove Joe Tate is still alive?

Arriving at Home Farm in search of boss Graham Foster, Nicola bumped into Priya who joked that she had become a “fiery redhead”.

She said: “It’s a brave choice… I’m joking. It suits you, being a fiery redhead.”

As Nicola plotted against Graham as he flounders in his pit of  despair, fans gathered on Twitter to critique her new look.

"…it's not going to take him long to notice what we're up to."

Nicola's got a plan up her sleeve! #Emmerdale pic.twitter.com/ROkvImy0jX

Others weren’t so kind, however, with some comparing Nicola’s new look to “Chucky” and the clown from IT.

While one even asked to know the name of the hairdresser!

Nicola’s new haircut. I think it’s the first time I’ve seen someone with MORE hair after a haircut than they had before. The colour, the texture, the volume I’d like to know the name of the hairdresser that achieved that PLEASE. #Emmerdale

I think Nicola looks pretty fit as a "ginge!" #Emmerdale

One wrote: “When did Nicola turn into Yvette Fielding? Both equally as irritating though. Whoever did that dye job needs sacked.”

Another harsh critic said: “I don’t like Nicola hair at all whoever did it must be blind.”

One more simply typed: “What is wrong with Nicola hair???”

what is wrong with Nicola hair ??? #emmerdale

@emmerdale When did Nicola turn into Yvette Fielding? Both equally as irritating though.
Whoever did that dye job needs sacked. pic.twitter.com/vkRsOgcH15

Whether fans liked her hair or not, we’ll all have to wait and see if she manages to steal Graham Foster’s fortune from under him.

Red or blonde? How do you prefer Nicola King? Leave us a comment on our Facebook page @EntertainmentDailyFix and let us know what you think!