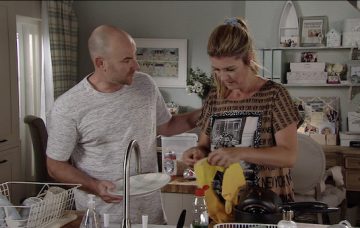 Will they do the dirty on poor Sally?

There have been more meaningful looks from Gina Seddon towards brother-in-law Tim Metcalfe than we care to remember over the last few weeks… and it seems that perhaps Coronation Street writers could be lining up a shock affair for the pair.

After finding herself newly single after being unceremoniously dumped by Dev Alahan, Gina saw a new side to Tim when he stood up for her following the drama.

And while the feeling doesn’t seem to be mutual on Tim’s behalf at the moment, there is a distinct possibility that Sally could be heading for a stint in jail soon – paving the way for Gina to step in to offer comfort.

In new behind the scenes pictures, it has been revealed that the pair start to grow closer as Sal’s legal battles begin to take their toll on the family.

Joe Duttine and Connie Hyde, who play the forbidden pair, have been spotted filming on location for scenes to be aired later this year.

In the images it looks like Tim has become Gina’s knight in shining armour when she gets herself into a spot of bother and he comes to her rescue.

But while they’re sneaking around together, it seems they accidentally attract police attention when Tim is apparently pulled over in his taxi and fails a breathalyser test.

While Tim is likely to be in big trouble for driving under the influence, this not only spells trouble for his job, but also for his relationship with Gina.

If they are up to no good, will this latest twist in the tale mean their secret is found out?

Poor Sally would be heartbroken if her sister and husband really were playing away together – especially as she could be potentially behind bars when all this is happening.

With the Metcalfe marriage seemingly rock solid at the moment, would Coronation Street writers really thrown what they’ve got together down the pan for another affair storyline?

Look out for these scenes on Coronation Street in November.

Do you think Tim would cheat on Sally? Leave us a comment on our Facebook page @EntertainmentDailyFix and let us know what you think!