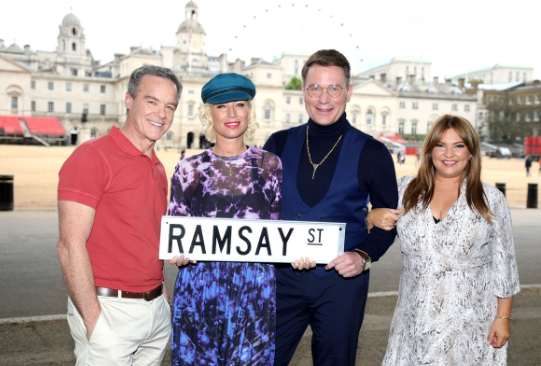 They both have cameo roles in the show

Alongside Denise, Good Morning Britain showbiz reporter Richard Arnold will also make a cameo appearance in some of her scenes.

I’m so excited to join the cast of @neighbours . Shooting London scenes this week, then I’m off to Australia to stir things up a bit on Ramsey Street 😁. Can’t wait to work with my on screen daughter @jemma_donovan ❤️ 🇦🇺 #ramseystreet #australia

Denise said: “I am thrilled to be joining the cast of one the world’s most iconic shows, Neighbours.

“To be asked is a privilege and I am very excited to get to work on a really fun storyline first in London and then heading over to Melbourne.

“I can’t say too much just yet but my character Prue is heading to Ramsay Street to stir things up and I can’t wait.”

While Denise will begin Neighbours life shooting scenes at London’s St James Park this week, alongside Stefan Dennis and Rebekah Elmaloglou, she will head to the show’s Melbourne set to continue filming her scenes.

Richard – who made a cameo in Channel 4 soap Hollyoaks last year – will star as Graham, a guy who exerts an unhealthy influence over Prue.

He said: “I always knew my career would hit a ‘dead end’ eventually but I never dreamed it would do so in such spectacular fashion joining the cast of Neighbours, home to the most famous cul-de-sac in television.

We are delighted to announce that @denise_vanouten is joining us for a guest role on the show. Denise will play Prue Wallace, mother to Harlow Robinson, who will be played by @jemdonovan.

And as an extra special treat, @RichardAArnold was also on set playing a cameo role. pic.twitter.com/2Y8eNAnv3S

Stefan is also delighted about the pair joining the Channel 5 soap.

He added: “We love the Brits and being in this incredible city. Getting the chance to work with Denise and Richard is a real treat.”

Denise – who played Karin Smart in EastEnders in April 2015 – and Richard, who will only appear in one Neighbours episode, will feature on screen later this year.