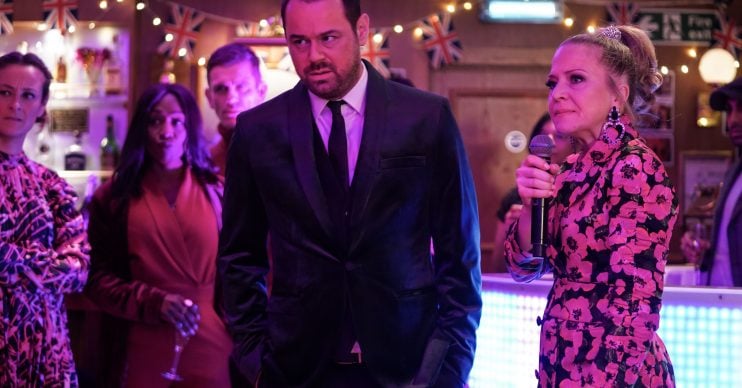 EastEnders thanks Neighbours for its happy birthday messages on-screen

Showing love from Down Under

EastEnders has thanked Aussie soap Neighbours after it led birthday wishes to the BBC One soap with a nod to it in yesterday’s episode (Wednesday February 19 2020).

The soap referenced the London-based show on its 35th birthday today by featuring a sign outside bar The Waterhole which made a nod to EastEnders’ fictional location, Walford.

They also referenced legendary families, the Mitchells, the Fowlers, and the Slaters, by naming cocktails after them.

What’s more, there was a sign advertising a “Happy Half Hour” from 7.30pm to 8pm, the time EastEnders usually airs.

Now Easties has expressed gratitude for the gesture with a note on Twitter that read: “Thank you to our friends, @Neighbours, for marking our 35th birthday with this nod to all things #EastEnders.

“We raise a toast to you from The Vic to The Waterhole. #Neighbours #EastEnders35 (sic)”

Eagle-eyed viewer Suzanne Butterworth was seemingly the first to spot it, sharing her observation on Twitter.

Did anyone else see the #Eastenders reference in today’s #Neighbours ? Both soaps are celebrating 35 years & even though I don’t watch Eastenders, I hope they do the same for their Aussie counterpart. Nice touch @neighbours @bbceastenders pic.twitter.com/iSbyuXDHvj

I saw it too! pic.twitter.com/VvLCj1oQFS

Yep spotted it….. a nice touchhttps://t.co/gIsRDZBG68

Lovely tribute by Neighbours to EastEnders. Reminds me that, in the early nineties, there was a pub quiz in the Queen Vic and one of the questions was ‘what’s the name of the dog in Neighbours’ to which Ricky Butcher correctly answered ‘Bouncer’. He was then teased 4 watching it!

Happy Birthday #EastEnders35 and thank you Nicola for this trip down memory lane and the aging faces of me & @mrjakedwood https://t.co/gGbCieVn11

Jo Joyner – who previously played Tanya Branning on the show – wrote: “Happy Birthday #EastEnders35  and thank you Nicola for this trip down memory lane and the aging faces of me & @mrjakedwood (sic)”

Jake Wood – who plays Tanya’s ex-husband Max Branning – tweeted: “Speak for yourself Jo, mind you I’m sure I had a full head of hair back in. 2006!! Miss working with ya (sic)”

So 35 years ago today @bbceastenders burst onto our screens. I loved this girl, she gave me so much. Happy Birthday EastEnders! #marythepunk pic.twitter.com/dzr1Qdsjyo

Linda Davidson – who played Mary ‘The Punk’ Smith in the soap – wrote: “So 35 years ago today @bbceastenders burst onto our screens. I loved this girl, she gave me so much. Happy Birthday EastEnders! #marythepunk (sic)”

So 35 years ago today @bbceastenders burst onto our screens. I loved this girl, she gave me so much.

While the soap isn’t on tonight because it doesn’t air on Wednesdays, fans have been left on tenterhooks at the halfway stage of the epic 35th anniversary episodes.

The main focus of the episodes is on the Carters’ boat party on the River Thames, which has descended into chaos as the vessel crashed and both Linda Carter (Kellie Bright) and Dennis Mitchell (Bleu Landau) are trapped, with the water rising.

There has already been one casualty in recent episodes as evil stalker Leo King (Tom Wells) was stabbed to death by Whitney Dean (Shona McGarty) back on dry land.

Following the incident, Tom took to Twitter to thank the cast and crew for making him feel “so welcome” on the show, and he praised Shona.

He wrote: “RIP Leo King! I just wanted to say a massive thanks for all the kind words on here, also @bbceastenders for having me, making me feel so welcome, @conormorr for finishing me in style & @ShonaBM for being the best acting partner I could ever dream of, really! It has been a blast. (sic)”