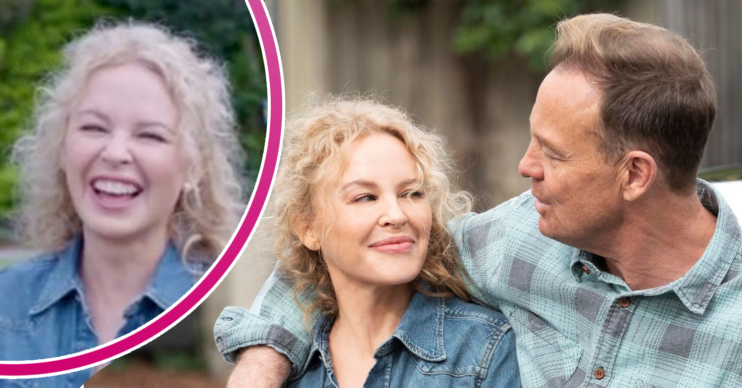 Fans couldn't understand why Kylie's return happened like this

Neighbours fans are all saying the same thing after Kylie Minogue returned for the final episode.

The Aussie pop princess made her comeback as Charlene Robinson after 34 years away.

She was seen returning alongside former co-star Jason Donovan as Scott Robinson as they arrived on Ramsay Street for a reunion.

However while Jason had several lines, Kylie only uttered a few words.

And fans feel cheated out of Charlene’s long awaited return.

They took to social media to bemoan the situation and hit out at the soap for not using Kylie properly.

One said: “Why aren’t they letting Kylie speak?! #Neighbours”

Neighbours brings back Kylie and Jason

A second said: “Obsessed with Neighbours getting Kylie Minogue back to speak about five or six words and nothing more.

“Excellent nodding and smiling though.”

A third said: “They could afford Kylie Minogue but only if she didn’t speak. #Neighbours”

Another said: “Just seen the last clip of Neighbours – why didn’t Kylie speak?? It is bizarre.”

Kylie recently opened up about being unsure about returning to the soap for its swansong.

“I guess because the show kept going and moved on,” she said.

“Also, Charlene was such a presence in people’s memory, I wasn’t sure how it would work,” Kylie admitted.

“Neighbours wrapping up has put a completely different spin on all of it – it opened the door for this to happen.

“I didn’t really see it happening but now it has, it feels good.”

“It feels amazing, surreal and very emotional,” she added.

“Same houses, same street – there is no easy answer, just a mix of emotions, but very happy. Very aware of the moment.”