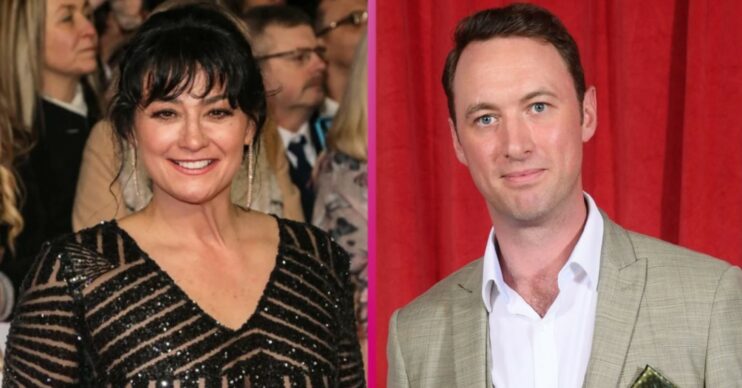 The couple moved in together during lockdown

Natalie J Robb and Jonny McPherson have reportedly split after moving in together during lockdown.

The Emmerdale stars are believed to have called it quits months ago, after their year-long relationship ran its course.

The pair, who play Moira Dingle and Dr Liam Cavanagh on the soap, went public with their romance in June last year.

According to Digital Spy, the couple haven’t been together for several months.

Nowadays, the actor is enjoying the company of his rescue dog, Molly, after moving out on his boat.

“You’ve got a living area for watching telly or whatever, then you’ve got a place to eat, a kitchen and a bedroom. And that’s it and that’s all you need.”

Natalie, 46, and Jonny, 39, shocked soap fans last year when it emerged they were dating.

They were first spotted on a lockdown video call celebration for their co-star, Liam Fox’s birthday.

As Jonny and Natalie joined the call together, it was obvious the two were isolating as a pair.

Meanwhile, last year, Jonny opened up about their relationship and potentially having children.

He told The Mirror about their romance and moving in together in lockdown: “We had to make a decision as lots of couples did.

“We decided to move in together and so, yes, lockdown did fast forward our relationship.”

I have a fantastic job and Natalie is wonderful too

“But I am so lucky as Natalie and I both love acting and as long as I’m working then I am delighted.

“I have a fantastic job and Natalie is wonderful too.”

Natalie opens up on their relationship

Furthermore, Natalie appeared just as smitten with her co-star boyfriend.

The actress, who first appeared on the soap in 2009, previously confirmed their romance on Loose Women.

She revealed they had worked together for years, but didn’t start dating until January 2020.

Read more: Emmerdale: What wedding song was Bernice playing? Is it from Neighbours?

Natalie shared: “Jonny McPherson and I started to see each other, our first date was in mid-January and then we were just having a couple of dates in February.

“Then obviously in March lockdown happened.”

In addition, she admitted their relationship ‘evolved’ following a charity event in Lapland.